I ran across something interesting the other day, on industry engineering magazine Design News' blogs.  Author Beth Stackpole, who ordinarily seems to be a pretty cogent writer, did a piece that attracted my attention.  Design News, like all of them, will send you a daily newsletter with links to some of the news stories going on around us.  This one was featured with lead-in:

The lead was terribly misleading, and while the article eventually got in all the words that described it properly, you had to tease out the facts that:
Now we know that anyone handy with tools can build an AR lower.  That's not news.  In addition to the 80% lower route I went, guys have made functioning AR lowers out of pieces of 1/8"thick  aluminum plate, drilled, tapped and screwed together (with some milling involved), and we've seen one AR made from a plastic kitchen cutting board.  I understand soft pine hasn't worked out very well, but walnut has.  The novelty was that the lower was printed on a 3D printer.  Not a $500 home printer, but an old Stratasys commercial printer that sold for tens of thousands when new. This story has been around for a while now. 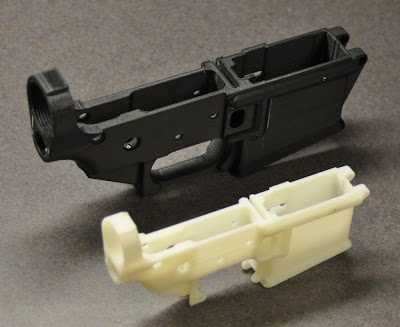 (test receivers, both 3D printed from Haveblue.org)
But what got me about this article was not the errors in terminology, but the comments.  I understand that people who aren't really firearms literate would not be aware of many things, but the view of firearms as inherently evil rather than amoral mechanical things was plainly evident.
So much for engineers always being logical and thinking critically.  Sigh...