Life In Greece After the Collapse of Civilization

Although it has largely disappeared from our news, Greece has collapsed.  The economy, such as it was, is gone, and people are back to largely living by subsistence farming and trading whatever skills they might have, whatever things they might have.  It's post (or pre-) civilization in Greece.

John Robb's Resilient Communities brings the story, with links to the BBC.
Greece is a great example of what collapse in the modern world looks like: 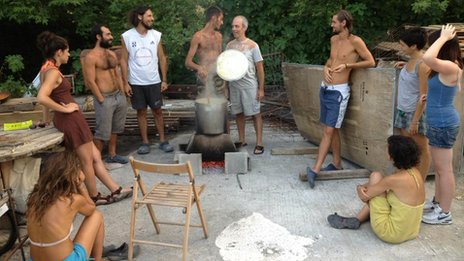 While this isn't the Book of Eli, it clearly isn't the lap of luxury, either.  Life is hard, day to day survival.  It's not the Zombie apocalypse, it’s just depressing.

While that photograph links to an article mostly about happy hippies who wanted to get away from civilization, the situation isn't all kids living out dreams.


Until last year, Thomas and Eleni lived with their two children in Athens. But as they lost their jobs and faced soaring taxes, they decided that the everyday struggle of city life was too much. The family moved back in with Thomas's mother in her house in the tiny village of Pahikalamo, in north-west Greece.

Around a simple lunch Eleni tells me there was no other option. "We lost our income and had two children to raise," she says. "I was waking up and doing nothing except trying to find work. And then I couldn't sleep at night because I so worried about tomorrow."

The Greeks are reversing the megatrend of the last century: they're moving from the big cities back to the countryside.  The population of Athens doubled in 30 years (1950-1980).  Now 70% are saying they want to move back to the smaller towns.  They're also reversing the worldwide megatrend of the 20th century: they're abandoning currency and credit, and are returning to money and barter.

Unless the American megatrend of increasing debt with no end is broken, this is our future, too.  How far out?  That depends on far too many variables to give an accurate answer.  We still have time to work on our own resilience: our abilities to work the ground, try to grow some food, try to achieve more preparations.  As Robb says, we can better bounce back from an economic collapse ...


By becoming resilient in our personal lives.  By learning how to make our own jobs.  By becoming healthy and fit and helping others to do the same.   By turning our homes into productive assets that reduce our expenses and increase our incomes.  By connecting with our families and neighbors to build resilient communities and dynamic local economies.  By producing most of the food, water, energy, and products we need locally.  By learning to sell and trade artisanal products and services we make locally, to the world.

While I have my doubts about the last one (who buys artisanal products when no one has luxury goods? - maybe I don't understand how he's using that word) there's no doubt the rest is reasonable advice.   And it certainly seems to be no doubt that we are living in the days Ludwig von Mises described:


There is no means of avoiding the final collapse of a boom brought about by credit expansion. The alternative is only whether the crisis should come sooner as a result of the voluntary abandonment of further credit expansion, or later as a final and total catastrophe of the currency system involved. -- Ludwig von Mises