This has actually been posted for at least a week, but this is on the local NWS website: 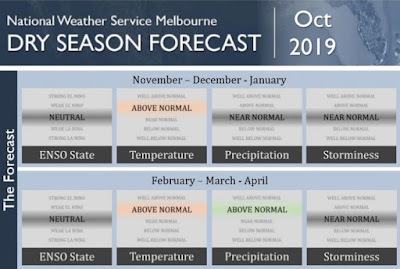 Temperature is forecast to be above normal for the next six months; the rest all looks boringly normal.  The really odd one is in February through April when the temperature and precipitation are both above normal.  Ordinarily, the clouds associated with that rainfall keeps the temperature down, and it's pretty common for above normal rain to accompany below normal temperatures.

The ENSO State - the phase or state of the El Nino Southern Oscillation - has a pronounced effect on our conditions, and they're predicting it to be neutral.  So far, their prediction is running a little lower than reality, which Watts Up With That summarizes as a weak El Nino.  (Warning: that link to WUWT's El Nino page will drown you with a fire hose of data) 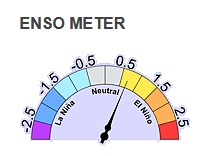 Personally, I'd rather see temperatures in the below normal range for the entire dry season, but maybe I've been reading too much talk about the deep solar minimum leading to global cooling for the next decade.  Cool is unusual here, so the novelty appeals to me.