Liz Warren's $52 Trillion "Medicare For All"

Yesterday, 1 November, Lizzie Warren (D., Uranus) finally unveiled her budgetary numbers for her often-talked-about-but-never-with-numbers medicare for all plan.  It will cost $52 trillion dollars "and, she claims, will not require any middle-class tax increases."

$52 Trillion might be real; at least it's quite a bit more than the $34 trillion advanced by The Urban Institute and covered here on October 18.  It's the part about not requiring middle-class tax increases that I think is just utter nonsense.

Let's say, with no particular reason, that this is $5.2 Trillion per year for 10 years, and not increasing exponentially from nothing in its first year.  The current federal budget is about $4 trillion per year, and revenue is closer to $3 trillion leaving a deficit of just over $1 trillion.  Spending would then go to $9.2 t per year and the deficit to $6.2 trillion/year.  The current national debt just crossed $23 trillion at the much lower yearly increases we've had for a couple of years.  Going from $1.1/year to $6.2/year is going to really shock the bond markets.  Something's got to give.

Remember part of her plan is to outlaw the medical insurance industry.  According to some numbers I looked up last time, that industry alone is about $1 Trillion/year in revenue and 621,000 people's careers.  All of those jobs will be lost.  Add that to the economic havoc that will ensue.

By convenient coincidence, the Committee For a Responsible Federal Budget did an analysis of how to pay for it on October 28th, three days before the release of better numbers.  Yahoo Financial News covers the story:


Warren justifies many of her programs by saying all it would take is “two cents” from the wealthy. That’s a reference to her 2% wealth tax on ultra-millionaires. But Medicare for All would be so expensive that if you taxed top earners at 100%—that’s right, if you took all the income of couples earning more than $408,000 per year—you’d still fall far short. And everybody getting taxed at 100% would obviously stop working.

Okay, that won’t do it. So what will? CRFB outlined a variety of options. A 42% national sales tax (known as a valued-added tax) would generate about $3 trillion in revenue. But it would destroy the consumer spending that’s the backbone of the U.S. economy. A tax of that magnitude would be like 42% inflation, wrecking consumer budgets and the many companies that depend on them, from Walmart and Amazon to your local car dealer.

Other options include a 32% payroll tax split between employers and workers or a 25% income surtax on everybody. Or, the government could cut 80% of spending on everything but health care, which would include highways, airports and the Pentagon. Or here’s a good one: Just borrow the money and quadruple Washington’s annual deficits.

The best idea might be charging every enrollee in the new program $7,500 per year, so they’d be paying directly for the coverage they’re getting. Some people pay more than that now for health care, by purchasing insurance outright or sacrificing pay raises in exchange for employer coverage. It would still be a nifty trick to propose that to voters.

The upside to these impossibly draconian scenarios is that nobody would pay anything for health care, except in the $7,500 example. And it’s possible that Medicare for All would cover health care for more people at a lower total cost than we spend now, meaning the average cost per person would go down. The problem is transitioning from what we have now to whatever Medicare for all would be. And it’s a giant problem, like crossing the Mississippi River without a bridge or a boat. The other side might look great but you’ll die before you get there.

My first reaction was to to say, "ain't gonna happen," although I did it with my fingers crossed.  I'd hope that there's enough people in the gubmint that aren't full tilt crazy.  Then I remember the prominence of modern monetary theory in the Evil party these days.

If this twit gets her way, it's game over.  Economic collapse. 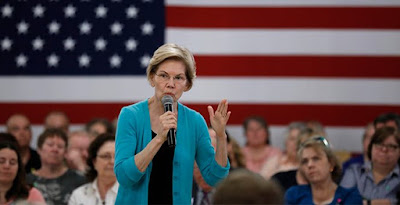