The headline on Teslarati was "Musk says upgraded SpaceX Starship to launch “later this week” after static fire test" which would imply that they got the results they wanted from last night's static fire.

Today, Lab Padre said SpaceX had issued another over-pressure notice.  The road closure was on and off from 12 Noon to 8PM CDT and it was hard to see if they were going to do a static firing until well after 7PM Eastern.  It was 6:48:47 PM CDT and 7:48 here. 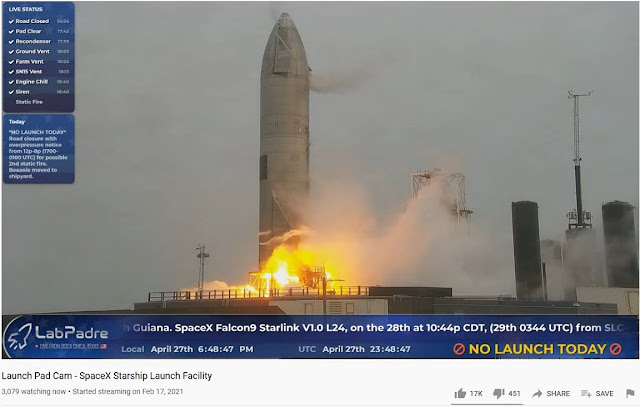 The commentators on the channel said they had looked at different cameras carefully and are convinced this is a single Raptor firing.  The speculate the reason is that yesterday they tested all three engines with the main tanks while this evening's test was to test one engine with the header tanks.  Those are the two small tanks that hold the fuel and oxidizer for landing.  The LOX tank is at the very nose of the Starship while the methane tank is actually inside the main methane tank, much closer to the engines.

To put it in perspective, serial numbers 8 through 11 flew between December 2020 and April 2021.  All four failed to complete the tricky maneuver of falling belly first, flipping vertically, lighting two engines and coming to a soft landing.  SN10 landed successfully, but it was a hard landing, collapsing legs.  10 minutes later one tank exploded destroying the vehicle. Lifting a good summary from Eric Ralph at Teslarati:


All four failures ultimately had different causes. Starship SN8 lost fuel tank pressure, starving its Raptors and causing a near-total loss of thrust seconds before touchdown. One of SN9’s Raptors failed to ignite for a landing burn, triggering an even more aggressive impact with the ground. Starship SN10 landed in one piece but its lone landing engine underperformed when it began to ingest helium ullage gas – a quick-fix implemented after SN8’s pressurization issue. SN11 exploded almost immediately after attempting to ignite its three engines for landing, failing even earlier than its predecessors.

All four flight tests saw each respective Starship prototypes narrowly miss a fully successful and survivable landing, providing SpaceX a great deal of data and direct experience to improve the rocket’s design and operations with. Two of the four failures – SN9 and SN11 – appear to have been the fault of one or more of Starship’s three Raptor engines. Beginning with Starship SN15, SpaceX has moved to an upgraded iteration of the next-generation engine, raising hopes that whatever changes the company has implemented will substantially improve reliability and thus the odds of a successful high-altitude launch and landing test.

What does "later this week" mean?  Weather-wise, it looks like Thursday might be the best day, by the Weather Underground forecast.  Friday looks to be cloudy all day with some thunderstorms around all day.  Thursday looks to have lower chance of rain, and clouds clearing out by the late afternoon to evening.