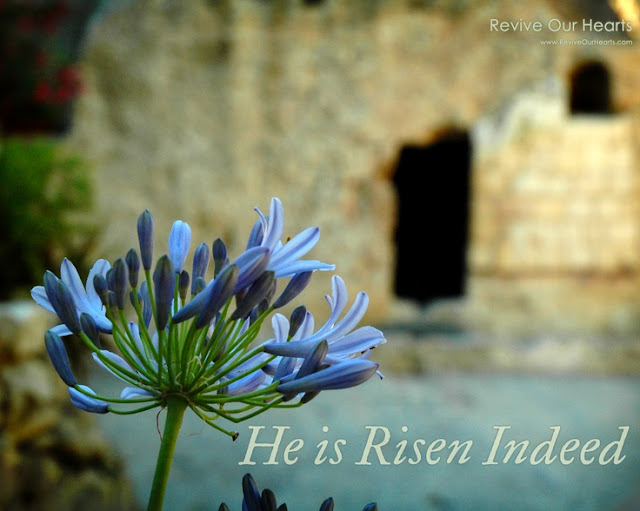 It's Easter, Resurrection Sunday, and as I do regularly, I look at what I've done for the major holidays in the past, and often modify them quite a bit.  Not wholesale tear it up and start over, but some extensive additions and deletions.


Looking for the Living One in a Cemetery

24 1-3 At the crack of dawn on Sunday, the women came to the tomb carrying the burial spices they had prepared. They found the entrance stone rolled back from the tomb, so they walked in. But once inside, they couldn’t find the body of the Master Jesus.

4-8 They were puzzled, wondering what to make of this. Then, out of nowhere it seemed, two men, light cascading over them, stood there. The women were awestruck and bowed down in worship. The men said, “Why are you looking for the Living One in a cemetery? He is not here, but raised up. Remember how he told you when you were still back in Galilee that he had to be handed over to sinners, be killed on a cross, and in three days rise up?” Then they remembered Jesus’ words.
9-11 They left the tomb and broke the news of all this to the Eleven and the rest. Mary Magdalene, Joanna, Mary the mother of James, and the other women with them kept telling these things to the apostles, but the apostles didn’t believe a word of it, thought they were making it all up.
12 But Peter jumped to his feet and ran to the tomb. He stooped to look in and saw a few grave clothes, that’s all. He walked away puzzled, shaking his head.
Luke 24:1-12  Message Translation

A couple of days ago, Larry Lambert over at Virtual Mirage left an open forum with the suggestion of posting of whether or not you're "a person of science or as a person of faith."  I don't think those are opposites, such that one can only be one or the other and I'm sure that Larry knows that many scientists are Christians so it had to be left to prompt conversation.

Coming from my background, becoming an evangelical Christian was a large change.  I had studied biochemistry and microbiology in college through my third year before life imposed some detours, eventually getting my degree and starting my career as an engineer late in life (over 30).  I had been an amateur astronomer, so between them I was deeply marinated in the standard model of Cosmology as well as conventional biological evolutionary theory.  Frankly, I wasn't giving it much thought any longer, but my wife had re-affirmed her faith (she had first accepted Christ as child) and I was having all of my mental models disrupted.  She had started a subscription to Bibical Archaeology Review and the constant refrain from archaeologists, not religiously motivated, along the lines of "we thought this was old Jewish folklore, but here it is" got me thinking "if that's true, maybe there's more that's true."  Strobel's The Case for Christ, played a role in filling in the gaps in my historical knowledge.

Easter is the most important day in Christianity and far more important than Christmas because of the resurrection.  Everyone has a birthday, but history only records one resurrection.  The resurrection is essential to Christianity; without it there simply is no reason for Christianity to exist.  Since virtually everyone, including honest atheists, agrees Jesus was a real man in history (I've always found it amazing that Jesus' existence is better attested in ancient sources than that of Julius Caesar - but no one claims Julius Caesar was not a real person) and died on the cross, the question becomes whether or not it can be verified that Christ was seen after the resurrection by someone other than the closest circle of disciples. Strobel says:

I still think a great summary is "Five Confounding Facts About Jesus' Resurrection" a 2016 post at Donald Sensing's Sense of Events (who doesn't seem to have posted since last summer but has left his archives up).  He has done several excellent posts on the subject, including Jesus and History and links to articles put together by working scientists, "On what basis would a scientist accept the Resurrection?" and "Is Belief in the Resurrection Unscientific?"

Enjoy your day.  Enjoy your families. As usual there's a pork butt going in to the smoker but only after 24 hours in the ultra-controlled sous vide cooker.  Pulled pork tonight.