Since I ran across this meme a couple of years ago, it has come up whenever references to Michael Collins, pilot of the Apollo 11 Command Module, as being the "loneliest man in history" come up.  I think it's sobering to add three words to the meme.  "Michael Collins is the only human, living or dead, in human history not contained in the frame of this picture." 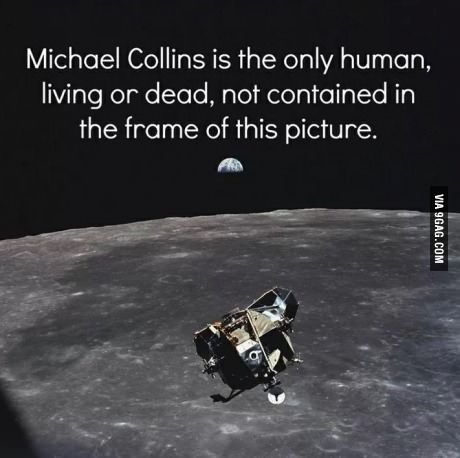 We learned that Michael Collins died earlier today after battling cancer.  He was 90 years old.

"He spent his final days peacefully, with his family by his side," the family said in a statement. "Mike always faced the challenges of life with grace and humility, and faced this, his final challenge, in the same way. We will miss him terribly."

Eric Berger, space columnist at Ars Technica, has a good biography posted.  After some details of his time in NASA, he concludes this way.

After this historic flight, Armstrong became famous as the first human to walk on the Moon. He bore it with dignity and quietly retreated from public life to work as a professor at the University of Cincinnati. He died in 2012 at the age of 82. Aldrin has lived a more public life, battling alcoholism but emerging as a cultural hero and living icon of the Moon program.

By contrast, Collins went on to a career of service, working as director of the National Air and Space Museum as well as other positions. He was a sober and intellectual figure after the Moon landing and was the poet of the mission, writing perhaps the finest astronaut autobiography of the Apollo age, Carrying the Fire: An Astronaut's Journeys. For anyone interested in a true accounting of what life was like as an astronaut (and watching two friends go down to the Moon), this book is essential reading.

Collins retired as an astronaut after the Apollo 11 mission and, in doing so, turned down a chance to go down to the lunar surface himself. According to Slayton, Collins was his first choice to serve as commander of Apollo 17, which would become the final mission to the Moon. This was even before the launch of Apollo 11. Collins replied by thanking Slayton for the offer but said he had grown tired of the grind, and if Apollo 11 went well he was planning to step aside. Collins has now finally found a deserved and eternal rest.

In 1994, Mrs. Graybeard was working as a technician on the Space Shuttle Solid Rocket Boosters up on the Cape, and I was working for Southeast Area Defense Contractor doing radio design.  When July approached, the KSC announced there would be a celebration of the 25th anniversary of Apollo 11, and all three astronauts would be there.  Families were invited.  Somewhere around here I have some photographs I took of Armstrong, Aldrin and Collins.  Of course, we just watched from the crowd, which included some of the people who were working various jobs in support of Apollo 11.

When I was younger, I used to wonder how Collins had felt about training all his adulthood for the possibility of going to the moon, and then not landing and walking around.  Later, I came to think he was doing his job, just like Neil Armstrong and Buzz Aldin.  His job was an integral part of theirs.  True, he was closer to the moon than billions of people have ever been, he just wasn't touching it.  As Robert E. Lee famously said, “Do your duty in all things. You cannot do more, you should never wish to do less.”  First and foremost, Michael Collins was doing his duty.

Rest in peace Michael Collins.  The world is a better place for you having passed this way.