As recently as this weekend, SpaceX appeared to have plans to static fire Starship SN15 on Monday and launch the rocket within 24 hours – April 20th (4/20).  For reasons never stated, although three Raptor engines were available to install by the end of last week, one, #54, was sent away for some sort of rework (commenters said to the test facility in McGregor, Texas).  Raptor #54 was then installed overnight during the weekend, but Monday's road closure was used to bring the second ground support tank to the new facility they're building. 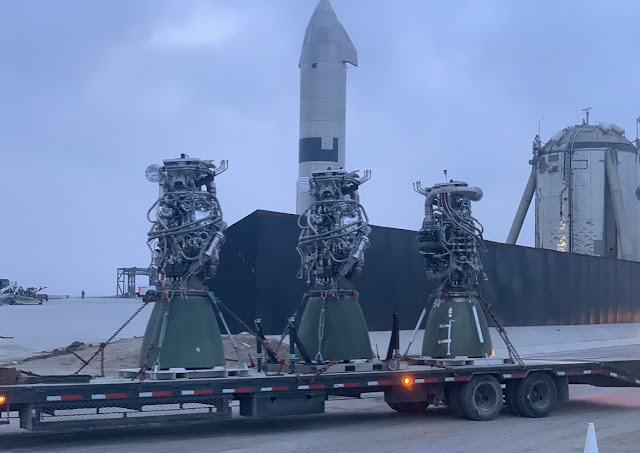 The three engines on the way to being installed the first time - SpacePadreIsle photo.  The engine number (54) is barely legible on the top of the engine bell of the engine on the right, but it's pointed at the other engines, not the direction we can read.  The engines reported to be on SN15 now are 54, 61, and 66.  The new version engines start at 54, so these are all the new ones.

Something changed while I was writing this. According to Michael Baylor of NextSpaceflight.com, there's a TFR for Friday.

We'll know more by the time the road is reopened tomorrow night.

EDIT 4/21/21 8:00PM EDT:  The road closure morphed into two closures, one around noon CDT and one later in the day.  The first was used to move a big crane to the test area; the second was cancelled.