NASA's Getting What It Wanted - Independent, Reliable Access to Space

As we sit here today, the International Space Station has two American spacecraft docked to it.  The last time two manned, American, spacecraft with two separate crews were in space together was the Gemini 6 and 7 mission in 1965.  Today, the crews of the Crew 1 and Crew 2 missions are sharing the (relatively) spacious inside of the ISS.

Today, we're three months short of the 10th anniversary of the last flight of a Space Shuttle.   NASA had to rely on the Russians for rides to the ISS; who promptly raised prices once they knew they had a captive audience.  Yesterday, SpaceX launched the Crew 2 mission at 5:49 AM local time.  It was the third manned mission that they've launched in under 11 months.  In itself, that's a healthy launch cadence, but since these missions are for months at a time on the ISS, it's likely they won't need to launch much more frequently.  I bet they could if there was a need.


"It took 10 years to get there, to achieve this bold vision for commercial crew," said NASA's acting administrator, Steve Jurczyk, during a news conference after Friday morning's launch. "It’s been amazing what the team has been able to accomplish."

The "team" is a collaboration between engineers at NASA and SpaceX that have worked to develop and certify the Crew Dragon system for human spaceflight for a fixed price of about $55 million per seat. Since 2017, NASA had been paying Russia more than $80 million for an astronaut to ride into orbit.

As I've mentioned before, I've read that back in 2014 when SpaceX was proposing reusable rockets, it was four years before they actually succeeded at recovering a rocket at sea.  NASA told them, in essence, "don't bid that; it's a pipe dream that'll never happen."  Fast forward to Friday morning and the reused Crew Dragon capsule Endeavor was launched on a reused, recovered booster.  In a moment of candor, Elon Musk showed that the progress in their reusable Falcon 9 system is surprising even him.


After the launch, SpaceX founder and Chief Engineer Elon Musk said he felt increasingly confident in the prospects of developing a reusable launch system. "It’s only recently that I feel like full and rapid reusability can be accomplished," he said. "I wasn’t sure for a long time, but I am now."

With the Falcon 9 and Crew Dragon, SpaceX has gotten mostly there. However, the Falcon 9 rocket's upper stage is expended after a launch, and the Dragon capsules undergo significant refurbishment between flights. Musk sees this launch system as an interim stage to full reuse, and SpaceX is still learning lessons. The company has already flown one of its Falcon 9 first stages nine times and will soon fly it a tenth time. The plan is to push the limits of the Falcon 9 with the company's own Starlink missions, Musk said.

"There doesn’t seem to be any obvious limits to the reusability of the vehicle," he said. "We intend to fly the Falcon 9 rocket until we see some kind of failure."

I've worked on designing radio systems for satellites before and it always amazed me to think that the level of screening, testing and documenting the parts is the most stringent of all components.  Then we'd build most rockets, use once and throw away.  I suspect that they're going to find their Falcon 9 boosters will easily exceed the 10 flight milestone.

Changing perspective wildly, I was able to watch the launch from my back yard as usual, and we were treated to a gorgeous flight, much like the one I wrote about last June.  It looked like a typical night launch until the two stages poked above the day/night terminator at altitude, and suddenly the whole contrail started glowing a bright, light blue.  When the booster cutoff and was jettisoned, the spreading  contrail from the upper stage glowed and I immediately saw the light pulsing stronger and weaker.  Within a few seconds I realized I was seeing the booster guiding itself toward it's eventual landing using its nitrogen thrusters.  Every time the first stage fired them, a spreading arc of white radiated out of it, in whichever direction, also turning light blue.  I got to see the first entry burn, but the landing burn is below the horizon from here.  Photographer Trevor Mahlmann at Ars Technica caught several great photos. 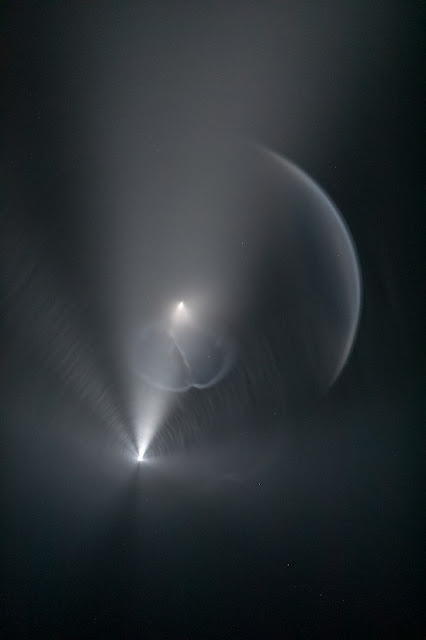 Here's what you're looking at.  The lowest bright spot is the second stage on the way to orbit.  The bright spot higher in the frame is the booster.  Below it are two spreading lobes of the bright reflection of its thrusters.  Farther out from booster in the upper right is the spreading arc of a slightly earlier firing of the thrusters.