The 80% Gun Kits From A Different Angle

Of course the big story is the handful of executive actions that Dopey Gropey announced Wednesday.  As an aside Ammoland, the National Shooting Sports Federation newsletter pointed out that these are Executive Actions, not Executive Orders and like everywhere else lawyers run the world, words make a difference.


In a 2018 article at ThoughtCo., writer Tom Murse noted, “(M)any critics [misunderstand] the definition of executive actions and the difference with legally binding executive orders.”

Executive orders, he explained, are “legally binding directives from the president to federal administrative agencies.”

Executive actions, ... carry none of the weight executive orders carry,” he wrote.

It should be remembered that none of the things Dopey talked about are executive orders.  They're the pResident telling the DOJ to do something.  I want to focus on the action related to "80% of a gun;"  Dopey McUnity wants the DOJ to sketch out a regulatory framework for requiring background checks on purchases of 80% frames, lowers and build kits (he wants them serialized).  Ignoring the obvious jokes and quips about just shifting to 79, 75 or 70% guns (80% is an arbitrary, made-up number) assume these actions to the DOJ become some sort of legally binding orders, in the next six months.

As virtually everybody knows, 80% guns are a hobby of their own, a hobby that attracts people who like to play with tools, and like all sorts of other Do It Yourself (DIY) hobbies.  To me, though, it gets back to something I've been following with interest for quite some time, the right to repair your own equipment, as talked about in the iFixit manifesto. 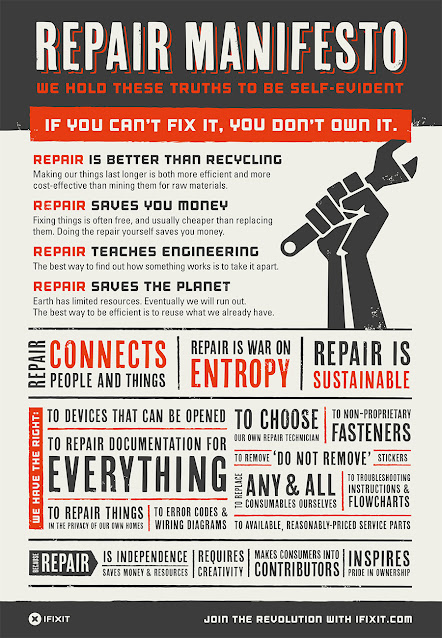 How does a move by a bunch of millennials to be able to fix smartphones or stick an off-the-shelf hard drive in their TiVo intersect with guns?   When you buy a gun, you have the right to repair and modify it.  There are millions of people who work on their own guns, replacing a spring, changing some piece of hardware or something.  Think your 10/22 could be a better competition rifle with a new barrel and trigger?  Go buy yourself the new parts and swap them out!  If you buy a 40 S&W pistol and decide you'd rather have 9 or 10mm, most of the time you can just buy a different barrel.  How many people have you come across who converted a rifle to a different caliber?  All of those are Right to Repair.

My understanding of the origin of the "not quite a gun" regulations that give rise to the "Ghost Guns" is that it began with simply asking at what point does a gun become a gun.  They started from accepting that we have a right to repair our property and named just the one part that is the gun and can't be replaced without a background check.  It led to ideas like the receiver is always the gun, and you can replace the barrel or put in a new trigger, and every other part, but as long as it's the same receiver, it's the same gun.  Those of you familiar with the rulings on AR pistols know the oddity that a receiver that has never been a rifle can be used as an AR pistol, but if a rifle receiver is used, that makes the pistol a short-barreled rifle, an NFA item.  That's because the receiver is associated in some paper trail with being a rifle, and it will always be a rifle.  While you can repair things attached to that receiver, perhaps replace an 18" rifle barrel with a 20" barrel, you can't make a rifle a pistol.

The thing the Biden rules are doing is attacking convenience.  They're concerned about it being too convenient to buy a plastic 80% pistol in one package and the parts to assemble it into a pistol at the same time.  Even worse, you can order or buy them at the same time and go home with everything you need to make that pistol.  It's like they'd prefer the 80% plastic gun and the rest of the parts be in different zip codes.

How about if we give Dopey a kit and time how long it takes him to make a gun out of it?  How about we give everyone on his staff the same test?  If it takes them longer than it would take to buy a gun, they don't need to treat them as fully assembled guns.

In serializing the 80% plastic pistols, which are not guns, they're starting down the slippery slope to no right to repair, and every part in every gun needs to be serialized.