Earth Day, as most of you know, is a holiday made up in the late 1960s at the start of the national environmental movement.  Ira Einhorn is one of the main founders of Earth Day, if not the guy who started it.  Ira practiced what he preached: he murdered his girlfriend (less stress on the planet) and composted her body in his closet.  (Hey - reduce, re-use, recycle!)

I was a science geek in high school in 1970, the first Earth Day, and indoctrinated into the liberal crap of the day.  Who can forget the commercial with the crying Indian ("Iron Eyes Cody", who - BTW - was Italian, not Native American) looking at the spoiled earth?  Caught up in the spirit of the day, we went looking for pollution, and tested a local canal for coliform bacteria.

The movement led to the creation of the Environmental Protection Agency, probably the best example of an agency that has outlived its usefulness.  Unlike government agencies, manufacturing companies are seriously interested in solving problems.  Quality Engineers, Manufacturing Engineers and many others have settled on the Pareto Principle.

Vilfredo Pareto was an Italian engineer who turned his mathematical skills to economic problems.  What he is best known for is the "80-20 Rule", the observation that 20% of the efforts produces 80% of the results.  Although it's an approximation, the rule is more or less right far more often than it is wrong.  Often called Pareto efficiency or Pareto Optimality, it has appeared in quality control, industrial engineering, and popular books.

How does this relate to the environment?  Pareto (and most of today's Quality Engineers) would say measure your problems.  Find the 20% of problems that cause 80% of the trouble and work to get rid of them while you let the others sit.  Then you "Lather. Rinse. Repeat."  What tends to happen is that you eliminate, or (at least) reduce the biggest problems and then have another set.  You eventually end up with much fewer problems and production running much smoother.

If you're a government agency, the last thing you want is to solve problems.  Then you have nothing to do.  This is how you get things like the EPA ruling that Ozone concentrations found naturally in unspoiled national parks are higher than should be allowed.

Two big problems come to mind.  The first is that reducing legal ozone levels because it's a component of pollution is like reducing legal oxygen levels because it's a component in seawater and we don't want to breathe seawater.  The second is that the current limit is already just about at the  natural background level of ozone.  In most of the country, it's physically impossible to measure the new limits because the natural background is higher than the level they're imposing!

Today, President Xo announced a goal of cutting CO2 emissions by 50% by 2030 - a mere nine years.  Even more laughable was the talk by Climate Czar John Kerry in which he said even when we get there, "We still have to suck carbon dioxide out of the atmosphere." One would hope he doesn't mean suck all the carbon dioxide out of the atmosphere.  Yeah, it's a trace gas but even third graders know that it feeds all the plants, and that sucking all the CO2 out of the atmosphere is impossible.  Every living creature on the planet will add back CO2 one breath later.  Plants exhale their CO2 at night.

The 50% goal, though, doesn't mean compared to today, it means compared to 2005.  In my world, when a politician picks a date like that, I automatically think "they're cherry picking the worst possible date," and sure enough this plot from Statista shows that 2005 was about the peak year of CO2 production in the US, pretty much 6000 mmt (million metric tons) of CO2. 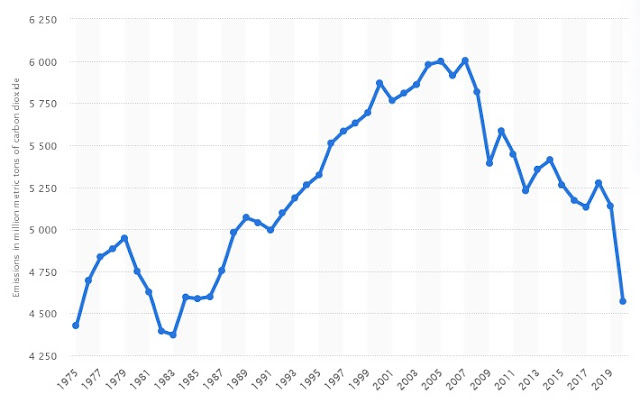 I honestly don't think it's possible at any reasonable cost.  The EPA says the transportation sector of the economy generates 29% of the so-called greenhouse gasses, so shutting down all transportation wouldn't be enough.  That includes not just cars and planes, the typical examples of pollution, but includes shipping goods around the country.  Replacing gasoline or diesel cars with electric just moves the CO2 production to the "electricity" sector - not counting the massive CO2 production in the "commercial" pie slice to manufacture the electric cars.  It would take reductions in all the sectors on this pie chart, and I just don't think it's there to save without invoking "and then something magical happens" - as Kerry pretty much did. 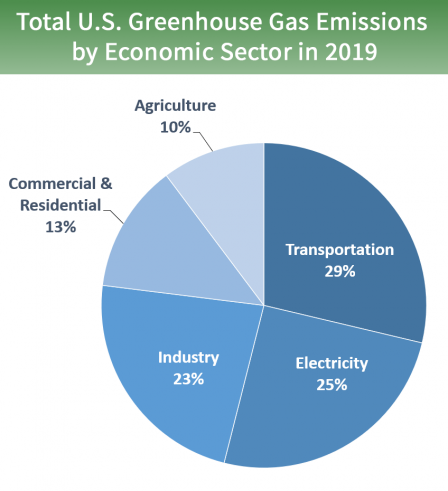 From the US EPA.