Earth Day Addendum for the Climate Change Peeps You Know

We all have those acquaintances or maybe family members that have drunk the Kool-Aid about a Climate Catastrophe. The ones who seriously believe the nonsense that it's a critical, problem and the world is going to end in 10 years or whatever we're down to.  Admittedly, most True Believers aren't going to believe what I'm going to show you.  There might, however, be people you talk with who are more data-driven and this will be like putting a pebble in their mental shoe.  They'll have to pay attention to it.

This graphic is from Dr. Roy Spencer, posted at Watts Up With That and at his own blog.  For those who don't know Dr. Spencer, here's his bio page.  What this shows is the predicted sea surface temperature trends predicted by 13 different CMIP6 climate models that were run 68 different times.  Those are plots in the various colors, behind the bolder, black line.  The black line is 42 years of measured data from the National Oceanographic and Atmospheric Administration (NOAA).  Clearly, for most of the plots, starting around 1992, the CMIP6 models dramatically over predict the temperature rise. 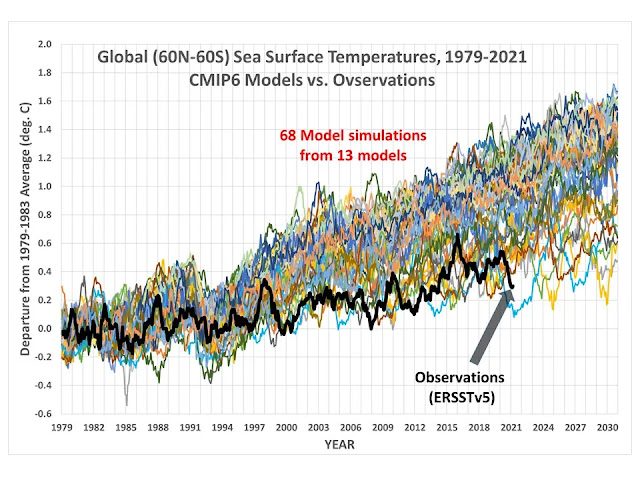 If you're not familiar with this sort of plot, the Y-axis is the temperature anomaly, stated as the difference between the 1979-1983 average and the measured or predicted data, plotted per year.  Dr. Spencer concludes that the real warming is half of the model predictions, but the model predictions are spread out over a wide band. The latest observation (right end of the black curve) is approximately 0.3C warmer than the 1979 start of these series, while the predictions range from one lower than the measured temperature at 0.1C to 1.5C higher.

Dr. Spencer is a reasonable scientist, he admits there are things he doesn't know and more.


A related issue is how much the deep oceans are warming. As I have mentioned before, the (inarguable) energy imbalance associated with deep-ocean warming in recent decades is only about 1 part (less than 1 Watt per sq. m) in 300 of the natural energy flows in the climate system.

This is a very tiny energy imbalance in the climate system. We know NONE of the natural energy flows to that level of accuracy.

What that means is that global warming could be mostly natural, and we would not even know it.

I’m not claiming that is the case. I am merely pointing out the level of faith that is involved in the adjustments made to climate models, which necessarily produce warming due to increasing CO2 because those models simply assume that there is no other source of warming.

That's the big issue we're facing: the reliance on models that don't match measured data and a reluctance to actually do the work to test a model.  The data is often hard to measure and truly global.  Just what does global average temperature even mean and how can it possibly be measured with the accuracy?


Why does it matter?

Yes, irregular warming is occurring. Yes, it is at least partly due to human greenhouse gas emissions. But seldom are the benefits of a somewhat warmer climate system mentioned, or the benefits of more CO2 in the atmosphere (which is required for life on Earth to exist).

There's no reason to spend trillions of dollars on the climate.  That will create real suffering and buy nothing good.