A Repost On Agenda 21 or Whatever They're Doing Now

Today, J.KB at Gun Free Zone posted an article on Genghis Khan talking about how Genghis Kahn is being talked about as so good for the environment.  Why?  Because he killed off 40 million people and "scrubbed 700m tonnes of carbon from the atmosphere – roughly the quantity of carbon dioxide generated in a year through global petrol consumption – by allowing previously populated and cultivated land to return to carbon-absorbing forest."  Khan killed a lot of people; 40 million was a substantial percentage of the population then, but he's still a piker compared to Chairman Mao who killed off at least twice that number.

Then Borepatch ran a post about that with some links to older posts he did talking about the same concepts.

Which led me back to one of my older posts that I've found myself looking up a few times a year (more, lately).  This is from June of 2011.  With 11 years of content, it's pretty amazing how often I go back to something I researched and posted years ago. This one of the posts I've looked up the most.  (The first short line with two links adds surprisingly little to the story, although the second adds more than the first.)

Let's Tie A Couple of Stories Together - part ii

Let me tie Wednesday and Saturday together.

As I said Wednesday's post, it's all about UN Agenda 21, and allowing the flooding of wide tracts of the US supports that idea.  Trevor Loudon at New Zeal has a great post to help you get up to speed on the UN's Agenda 21.   The implications of this plan make Soylent Green or any of the worst, most dystopian-future movies look like Mary Poppins (the most relentlessly optimistic, happy movie I can think of).  To begin with, let's look at a map.  Trevor has a small version, so I went and found one that's readable if you click on it: 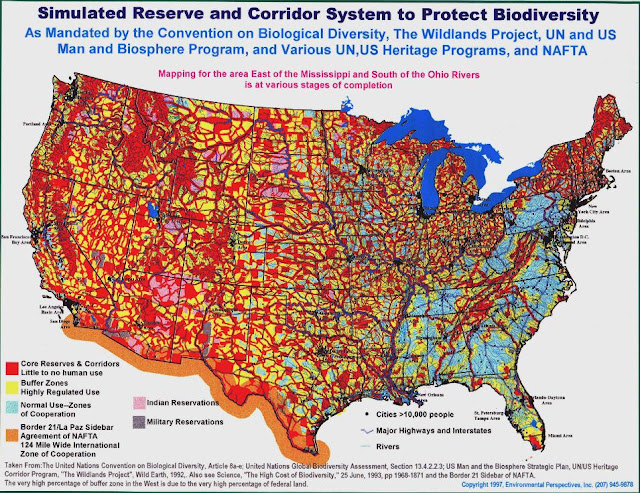 If this UN plan goes into effect, every area in red will be "forbidden zone" for humans. Every area in yellow will be "highly regulated".  I assume that means you will only be allowed there with permits and strict time limits - not to live there.  Humans will basically be allowed to live only in densely packed urban areas, shown as black dots.  Think all of the worst places in America: Chicago, Detroit, New York, Boston, DC... you get the idea.

Central to the plan is the idea of being carbon neutral.  That's right, "global warming" or "climate change" or whatever they call it this week, is the basis for mass murder on a scale that Mao, Pol Pot, or Hitler could never aspire to.  You see, to quote from this piece at End of The American Dream, (source missing, 4/14/21) the population must be reduced:
Gee, the moderate guy only wants to kill off more than 95% of the human race.  See the current world population is around 7 billion people.  For Dave Foreman, 100 million out of 7 billion is 100 out of 7000 or 1.4 %.  At 300 million, Ted Turner would generously let 4.3% live.

Around 20 years ago, I heard that the entire population of the world would fit in Jacksonville, Florida, without resorting to vertical high rise buildings.  It would be austere, but they would fit.  I found the area of the city (885 square miles), ran the calculation, and it worked.  Even today, you still could fit every man woman and child in the world in the area of Jacksonville, but each person would only get 3.5 square feet, so it would pretty much be shoulder to shoulder.  According to the Wiki, the area of the state of Florida is 65,755 square miles.  Given the 7 billion people in the world, if you spread them evenly across the state, every person in the world would get 261.9 square feet.  Not a big room (unless you're in NYC), and small by US standards, but generous compared to much of the world.  Of course, the infrastructure would take room, so you'd probably need to spread them out, but I suspect everyone in the world would fit comfortably in the southeastern US.  And we need to kill off 95% of them because they're taking up too many resources?

source for that and this:


“Indeed, it has been concluded that compulsory population-control laws, even including laws requiring compulsory abortion, could be sustained under the existing Constitution if the population crisis became sufficiently severe to endanger the society.”

So the Fed.gov, acting under the Agenda 21 of the UN, wants to forcibly - at gunpoint, I assume - abort your babies, put sterilants in the drinking water, move you to a city center where you can be stacked up like cord wood, and "live" where every move you make, every thing you eat, every decision you make, is made for you by the state.  If you're one of the few percent who aren't killed off.  All in the name of the skankiest, most corrupt "science" humans have ever put on paper (pretty good summary).   It's pretty damned obvious why they don't want us armed, isn't it?

Oh - if the idea of fitting the entire population of the world into Florida is shocking, you may want to look at this 2013 post.