The Truth Behind Overpopulation

Chances are that all your life you've heard about how overcrowded the earth is.  It's a basic tenet of militant environmentalists, who always seem to talk about saving life on Earth by destroying humans - as if we're not a native animal on the planet.  It's basic to Agenda 21, the massive UN program.   From the story in that link I posted two years ago:


Central to the plan is the idea of being carbon neutral.  That's right, "global warming" or "climate change" or whatever they call it this week, is the basis for mass murder on a scale that Mao, Pol Pot, or Hitler could never aspire to.  You see, to quote from this piece at End of The American Dream, the population must be reduced:
Gee, the moderate guy only wants to kill off more than 95% of the human race.  See the current world population is around 7 billion people.  For Dave Foreman, 100 million out of 7 billion is 100 out of 7000 or 1.4 %.  At 300 million, Ted Turner would generously let 4.3% live.

So how bad is the overpopulation that we need to kill off billions of people?  John Robb at Resilient Communities runs this graphic of how large an area the population of the world would consume if we housed them in the style of six different cities. 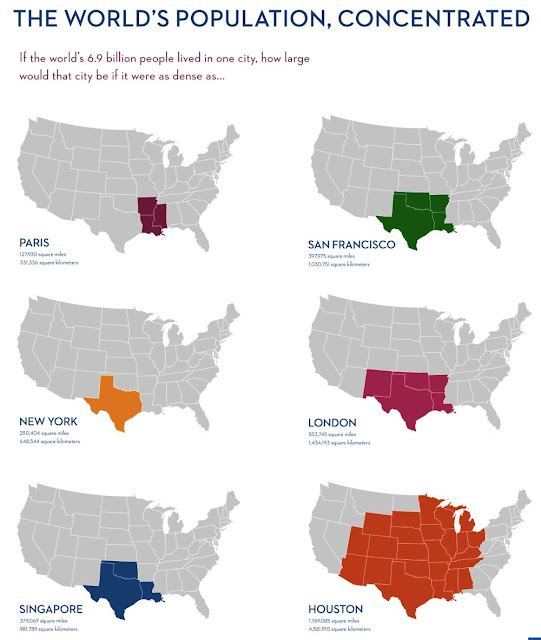 
Around 20 years ago, I heard that the entire population of the world would fit in Jacksonville, Florida, without resorting to vertical high rise buildings.  It would be austere, but they would fit.  ...  Even today, you still could fit every man woman and child in the world in the area of Jacksonville, but each person would only get 3.5 square feet, so it would pretty much be shoulder to shoulder.  According to the Wiki, the area of the state of Florida is 65,755 square miles.  Given the 7 billion people in the world, if you spread them evenly across the state, every person in the world would get 261.9 square feet.  Not a big room (unless you're in NYC), and small by US standards, but generous compared to much of the world.  Of course, the infrastructure would take room, so you'd probably need to spread them out, but I suspect everyone in the world would fit comfortably in the southeastern US.  And we need to kill off 95% of them because they're taking up too many resources?

Sure, there's more to providing for a population than putting them in these areas, which is Robb's whole point.  His whole blog is focused on developing communities that provide their own food, water and energy and therefore need minimum help from today's global web of imports.  But any of these colored areas is a tiny fraction of the land on the planet.  It's true that there are many areas on the planet unfit for farming or cultivating - or that we wouldn't want to.  The next time that some greenie starts rambling about needing to have fewer children to save the planet, patiently explain the entire population of the world could fit in Texas and live comfortably.  See if their head explodes.