Snowden, The NSA, The IRS and Some Thoughts

The NSA stuff that kid Snowden has made public has been covered everywhere - except here.  There's a lot of sparklies going on to distract us from the important stuff.  The entire incident, though, doesn't appear to be a sparklie. This video clip is from 2008, and an FBI advisor to a movie Shia Labeouf was working on pulled out a random phone call he made two years prior.

I personally can't stand the mindless news media, "Snowden: hero or a criminal?" thread that's going on.  First, it's a false dichotomy: he's a criminal by definition: he broke the laws on handling classified material.  Don't forget our founding fathers were criminals.  They were citizens of England and broke English laws by rebelling against the King.  Like the founding fathers, though, he could also be a hero.  Likewise the alarm over him saying "Lookie, the US has been hacking the Chinese computers just like they've been hacking us!" is almost 100% content free.  Anyone in a position of authority in either government who doesn't expect every government to be trying to break into their system needs to be fired, at minimum.  It's what intelligence services do, and as Borepatch has been saying lately, there may be friendly governments but there are no friendly intelligence services.

Remember the Soviet space shuttle, Buran, among the last publicity projects of the USSR?  Pretty striking resemblance to our shuttles, no?  Seen the Chinese J-31 stealth fighter?  Pretty striking resemblance to the F-35 Lightning, no?  Gee, I wonder how that could happen...  (Personally, I think inducing them to copy the F-35 is an attempt to bankrupt their defense industry, but that's just me).

The real question is the story about the wretched PATRIOT act and the NSA's grabbing all the metadata in America to try and find patterns.  In this matter, Snowden is exactly right when he said,


“Even if you're not doing anything wrong, you're being watched and recorded. The storage capability of these systems increases every year, consistently, by orders of magnitude, to where it's getting to the point where you don't have to have done anything wrong, you simply have to eventually fall under suspicion from somebody, even by a wrong call, and then they can use this system to go back in time and scrutinize every decision you've ever made, every friend you've ever discussed something with, and attack you on that basis, to sort of derive suspicion from an innocent life and paint anyone in the context of a wrongdoer.”

Congratulations:  we have achieved the very definition of a police state.  The founders would have been shooting by now.

I believe an attraction to the Obamanoids is combining the NSA surveillance state with the police state tactics of the IRS (apparently under legal advice of one Carter Hull) - using the IRS as a political baseball bat to intimidate and silence political opponents.  It appears that the IRS targeting of conservative groups actually affected the 2012 election.  This is as bad an example of executive power abuse as I can recall ever seeing.  In the Watergate era, the executive abuse was only against a small number of actual political opponents, not everyday citizens getting together to read history books or pray.  And I keep reading and hearing that although Nixon was accused of using the IRS against opponents, it was never proven he did.

This is what I think the whole thing is about under the Obamanoids.  They are using the security state to gain intelligence on possible political rivals so they can destroy them.  Remember the case of Jack Ryan, who was running against Obama for Senate from Illinois?  How previously sealed divorce records were suddenly available, causing Ryan to drop out of the race and putting Obama up against a last minute substitution of Alan Keyes?


Ryan would have walloped Obama in the Senate race. But at the request of -- again -- the Chicago Tribune, California Judge Robert Schnider unsealed the custody papers in Ryan's divorce five years earlier from Hollywood starlet Jeri Lynn Ryan, the bombshell Borg on "Star Trek: Voyager."

Getting sealed court records opened is virtually a trademarked move of Axelrod and the Obama camp.  Can you imagine if they have an opponent's entire life history, thanks to pervasive, 100% NSA data collection.  In the last couple of years I've heard several Stupid Party candidates say that their opponents had unexpected dirt on them, such as lists of websites they visited. Tapping that NSA database?  Does this sound like the Chicago way to you?

The Evil Party has a seriousness about how it plays politics that can't be overstated.  I'm not saying they won't openly cheat, or lie or steal elections.  I'm saying they prefer to look legitimate, like any other Chicago businessman. 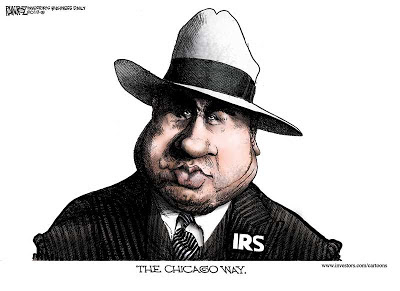