H/T to Bayou Renaissance Man for this article which reports (via Reuters) that the Bank for International Settlements, the BIS, has blasted the governments of the developed world and their central banks for not trying to get their economic houses in order and fix things before they break for good.


The Basel-based BIS lambasted firms and households as well as the public sector for not making good use of the time bought by ultra-loose monetary policy, which it said had ended up creating new financial strains and delaying rather than encouraging necessary economic adjustments. [emphasis added]

The BIS is sort of an uber-central bank; like the mother ship of central banks.  For them to say this is roughly translated as, "You idiots!!! We've been trying to give you time to get your sorry asses in shape so that the whole freaking world doesn't collapse, and what do you do?  You blow it on hookers and coke!!! "  Well, alright, maybe that's what I would have told them, but I think that's what they were thinking. It's arguable, of course, that there's a global plan among the elites to destroy the world's economy - so that they end up on top, but they're already on top, so this way, they'll be on topper..er.

The problem is that they can't jump start the economy by leaving the current absurdly loose fiscal policy in place (the latest Federal Reserve "bond purchases" are creating over a trillion dollars a year from nothing).  As Denninger says,


I have said since 2007 that the path of "bailout and lowering rates" in all of its forms could not possibly work.  It cannot work because a person who has too much debt cannot make themselves financially healthy by borrowing more money any more than you can drink yourself sober.

Nor are the effects a mere palliative or even purely psychological -- they have real impacts on real people in that currency dilution through credit issuance destroys purchasing power.  Giving people more and more handouts as the private sector is destroyed and its ability to produce squandered is not sustainable -- period.

Monetary inflation, what he means by "destroys purchasing power",  is the stated goal of the central bankers; it destroys individuals but helps central banks and nations.  (And Janet Yellen, the rumored replacement for the Bernank, is also a fan of inflation, too, arguing for inflation when Greenspan wanted to drive inflation to zero. )


We are now collectively in worse shape than we were in 2008 because we have issued trillions of additional credit into the system for which there is no matching production.

I've used a quote from Dr. Alan Bartlett before "The greatest shortcoming of the human race is our inability to understand the exponential function." - Back to KD:


Exponents are a bitch.  The longer you wait to deal with any problem that has a compound factor (that is, "X% per year") the worse it gets and the damage increase is not linear it becomes exponentially worse over time.  A 10% fiscal deficit that is "counteracted" with something like QE (which is what we've run, more or less, since 2007) doubles in 7 years -- not 10 -- and then it doubles again in another 7.  In 21 years it is not three times the original problem's size it's eight times larger!

We've already doubled down -- and doubled -- the pain we needed to take in 2007.  It will be four times as bad, and we will not survive it as a nation or society, if we let this go on for another seven years.

Sometimes it's a bitch to be able to do the math.  To see what's coming and not be able to convince anyone with any power that we have to change course or epically bad times are coming.  But this ain't the Frobenius method, this is arithmetic.  Even an honest lawyer should be able to see this.  (Hmmm - you know the old saying, the corrupt lawyers give the other .01% a bad name?). 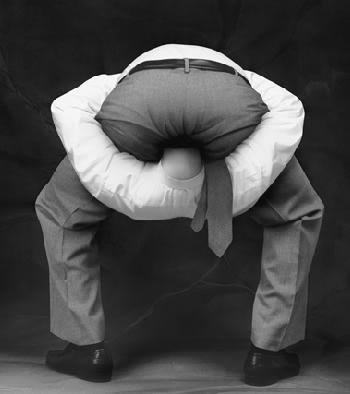