As a part of reading up for the other night's post on 3D printing vs. milling machines, there was a link to this book, Fab, by MIT physicist Neil Gershenfeld.  Dr. Gershenfeld. runs the "Center for Bits and Atoms" at MIT, which describes itself as, "... an interdisciplinary initiative exploring the boundary between computer science and physical science. CBA studies how to turn data into things, and things into data." I'm not sure when I've come across a more interesting guy.

He does a pretty good talk on TED, but while that talk struck me as a bit disconnected and rambling, this talk at The Edge seems better to both Mrs. Graybeard and I.  Dr. Gershenfeld's summary is this:


We've already had a digital revolution; we don't need to keep having it. The next big thing in computers will be literally outside the box, as we bring the programmability of the digital world to the rest of the world. With the benefit of hindsight, there's a tremendous historical parallel between the transition from mainframes to PCs and now from machine tools to personal fabrication. By personal fabrication I mean not just making mechanical structures, but fully functioning systems including sensing, logic, actuation, and displays.

Personal fabrication has the potential to completely turn everything we think in the order of producing and consuming upside down.  Dr. Gershenfeld goes on:


We're approaching being able to make one machine that can make any machine. I have a student working on this project who can graduate when his thesis walks out of the printer, meaning that he can output the document along with the functionality for it to get up and walk away.

In support of this basic research we started teaching a class, modestly called "How To Make (almost) Anything," where we show students how to use the millions of dollars of machines available at MIT for making things. This was meant to be a class for technical students to master the tools, but I was wholly unprepared for the reaction. On the first day a hundred or so students showed up begging to get into a class with room for ten people, saying "Please, all my life I've been waiting for this. I'll do anything to get in." Some would then furtively ask "are you allowed to teach something so useful at MIT?" There was a desperate demand by non technical students to take this class, who then used all of these capabilities in ways that I would never think of. One student, a sculptor with no engineering background, made a portable personal space for screaming that saves up your screams and plays them back later. Another made a Web browser that lets parrots navigate the Net.

I strongly recommend you watch the video on that Edge.com page.  There is powerful stuff going on.  We've all heard talk of the "Digital Divide" between rich and poor; he says he has seen computers sitting in villages because there's nothing useful to do with them.


The World Bank is trying to close the digital divide by bringing IT to the masses. ... Rather than the digital divide, the real story is that there's a fabrication and an instrumentation divide. Computing for the rest of the world only secondarily means browsing the Web; it demands rich means of input and output to interface computing to their worlds.

3D Printing and CNC machines are part of filling this fabrication and instrumentation divide.  Add in a personal injection molding machine on Kickstarter, (more info here) and you start to see the megatrend developing.  Small lot production folks are in a bind.  It can cost a lot to make a mold for injection molding (which allows you to mass produce cheap parts), but the surface quality you get from the mold is miles ahead of what you get on low end 3D printer.


If you want to make small, commercial-quality plastic parts or prototypes, it can cost $5,000 to $10,000 or more to make a steel mold. Then you send the mold to China, where a manufacturer will use large hydraulic molders to make 10,000 parts at 1 cent each. But if I only need 10 parts a week and want to make them quickly, on demand, there's no practical way to do that.

By the way, if you have a CNC mill, you can make your molds (yes, it's a specialty you'll have to learn).  A small production company can start with a 3D printer and small injection molding machine.  The difficulties of producing good, clean, injection molded parts go up quite a bit as the items get bigger, but this would fill many applications for typical small parts.

In the end, personal fabrication isn't about making personal versions of what Walmart sells for yourself.  It's about making something that nobody sells, or something that not enough people know about or care about.  It's about things with too little demand for the big companies to turn on the production machines.  Or it's about making the right thing you need just when you need it, when you're in "rural India or the far north of Norway", as Dr. Gershenfeld demonstrated.  Just as broadcasting with three networks has turned into narrowcasting with cable systems that carry hundreds of specialized channels, manufacturing is going to turn to more personalized products, too. 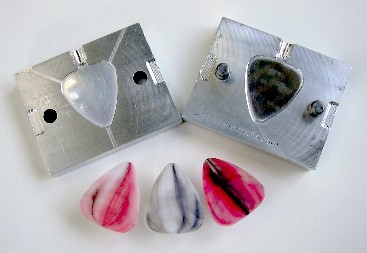