What's Up With the Precious Metals?

Standard disclaimer first: I'm not a professional at this stuff.  I'm a random internet dood.  Yeah, I usually do what I say.  I've made some good calls and some bad calls.  I put these ideas together by reading lots.

First off, I think we can all agree it's really hard to hit market peaks and bottoms.  I really believe it's more luck than not, even for the best investors.  I saw Jim Rogers saying he had moved to protect his positions in gold and silver last year, getting out of them to some degree, because all assets generally don't move as straight up as they have through the complete bull-market cycle.


"Most things correct 30 percent every year or two, even in big bull markets – 30 percent corrections are normal and yet gold has only done that once in the past 12 years," Rogers said. "Gold on any kind of historic market basis is overdue for a nice correction." 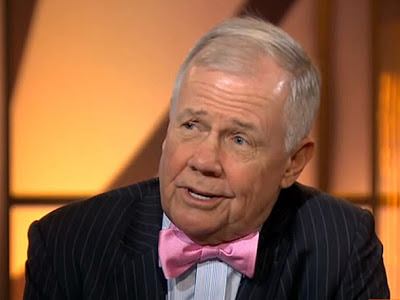 I gotta wish I had paid attention to that last winter.  Not sure what I would have done, but gold has been in that correction since the middle of last year, and while a lot of people are predicting a turnaround, they were predicting one a few hundred dollars an ounce higher last month.  (Say the same thing about silver, but drop the word hundred out of that sentence).  The mining stock indices have been hammered, along with the metals, and they don't generally track each other.  It's rather common for HUI or XAU to move counter to the metals; you may have heard the investment advice to invest in both the physical metals and the mining stocks for just this reason.

Last week, the stock and metals markets went into a snit when the Bernank simply mentioned that the gravy train can't go on forever.  The DJIA has been on a QE-funded roll for months now, creating the illusion of a market and economy in recovery.  The big board average only dropped about 5 percent, though, and then promptly gained back about half of it.  Look at the chart: we're only back where we were at the start of May. 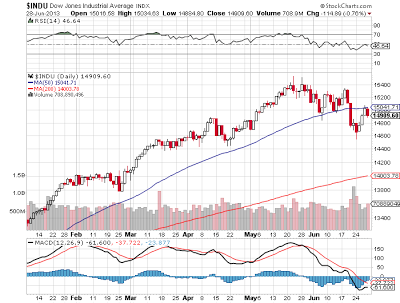 Don't forget that the major brokerages use gold and silver the same way millions of small investors do, too: as a hedge and store of value. Part of the reason for the big drop in the price of the metals two weeks ago was that investors were getting caught short and needed to raise funds.  They went to sell their (paper) gold and ran into a situation with far more sellers than buyers - a situation that is not at all uncommon.  This drove the price down.  I grabbed some silver at what were bargain basement lows, prices it hasn't been in years, only to see it drop another dollar an ounce this past week - which it recovered on Friday.

In times like this, I always ask myself if the fundamentals of the US and world economy have gotten better, or if it's just oddities of trading.  The answer is the fundamentals haven't improved that I can see.  I'll nod to Jim Rogers again when he said, "Please get worried" about the US economy in 2013 and 2014.

He added, “The next time is going to be even worse because the debt is so staggeringly high now. So if you are not worried about 2013, please — get worried.”

Like most of you, I view having some tangible assets on hand, whether it's silver or those wonderful brass/lead/copper assemblies, as essential to the future.  That means a continuous, dollar cost-averaged purchase plan is going to buy cheap some days and expensive some other days.  I can't tell you when it's going to start back up, but I believe as surely as I believe I'm sitting here that it will head up.  There are technical indicators that we could be at the bottom floor of a market that's ready to go on a strong up move.


Gold (GLD) is undergoing a significant correction after making a huge run from the 2008 low below $800 to $1900 in August of 2011.  Gold is significantly below its 3 year trailing average at $1550 and its 5 year trailing average at $1327.  The last time this occurred was in the late 90’s.  Investors who acquired gold back then saw incredible 660% gains while the equity markets did nothing over the next 15 years.