As I've mentioned before, Mrs. Graybeard and I have a small boat, the kind of small boat found in the yards and carports of much of America.  An aluminum V-hull boat, 16' long.  Seats about three with full fishing gear. 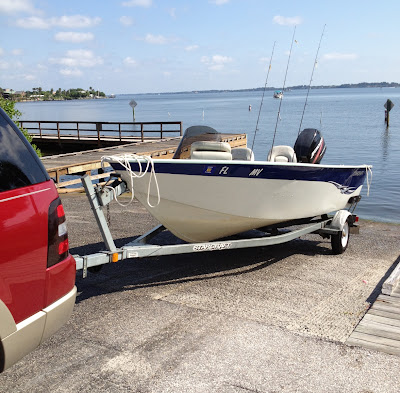 I'm not gonna lie: the last time we had a boat was around 1990, and while we've had this one out maybe 10 or 12 times, I'm still not really sharp at that whole launching and retrieving up the ramp sequence.  So today, while returning to dock, I got into one of those "America's stupidest home video" moments - feet on the deck while stretching out to reach for a piling - and fell out of the boat into the saltwater lagoon.

There's only one positive thing I can say: I didn't get hurt.

On the other hand, in my left front pocket was my iPhone 4s.  In another pocket was a magazine filled with .380 JHPs (the gun was safely in a bucket in the boat).  In other pockets were my wallet and car keys, with remote control door lock fob.

It took us less than a half hour to get home to where I could immerse the phone in water and isopropyl alcohol.  By that time, the phone's light had come on and it was hot to touch.  The battery drained down and it has been dead ever since.

Realizing it was time to pay the "stupid tax", I tried to call my local AT&T store and after minutes in voice mail purgatory, ended up talking with a guy somewhere who told me my two year contract would be available to renew on July 23.  Don't want to go without the NSA monitoring me for 6 weeks, but when I told him I needed my phone and contact list, he told me they could get me an iPhone 5 if I renewed my contract and he could get me a chance to do that now instead of waiting if I "act now".  I wasn't ready to tell him to sign me up for a two year contract, though.  Backed out of that and off we trundled to the local AT&T store.

My AT&T store left me feeling conflicted.  I've never felt quite so... serviced.  Not as in "what great customer service!"; more like "the farmer had his female hogs serviced".  They actually got me running in the sense that they gave me a SIM card to revive my 4 year old 3GS, I'm trying to restore my calendar now, so I suppose it wasn't that bad.  I can make phone calls and get my basic functionality back.  What got me is the only option to replace my phone they gave me was to sign up for their TV/ISP package, Uverse.  Ever heard of it?  I get offers in the mail all the time.  By snail mail, once a week for sure, by email, every couple of days.  So on the one hand, if I even try this Uverse stuff, I can renew my contract and get back to where I was before hitting the water.  On the other hand, why can't I just buy a replacement phone?

So here I am with a broken phone and they won't sell me a replacement without getting me to sign up for their cable TV, which I don't particularly want.  I'm sure it's fine, but I regularly ask myself exactly why I haven't pulled the cable out.  I sit down to watch about an hour of cable a week, maybe two, if good gun or fishing shows are running.

Yesterday was spent working on the boat.  Today was spent trying to recover from falling out of the boat.  Wouldn't have even been in the boat except to check out yesterday's work.  There's a lesson in there somewhere...

Posted by SiGraybeard at 7:48 PM