We've done it again.  The administration has determined that the US is going to support the enemies of Syrian strongman Assad.  The rebels are going to be supplied with small arms, - and arms are reaching them already - the very arms that administration's propaganda corps has been telling us are useless against an army, are going to be used for exactly that.  Syrian jihadist fighters, unlike you, will not be subject to a background check or big tax and long waiting period to get fully automatic weapons.

Let's be absolutely clear: we have no business in Syria.  There are no good guys to side with.  The government troops have gone beyond "ethnic cleansing" to just "population cleansing" - killing anyone of any age or sex who they think might be against them.  Children are forced into fighting.  The rebels are essentially Al Qaeda and Muslim Brotherhood  jihadists; these are the guys shown in a well-circulated video cutting out and eating the heart of a government soldier the rebel had just killed.  The government soldiers aren't much better, if any better at all.  Buck Sexton, National Security reporter for the Blaze says, “The level of violence and viciousness and evil that is going on in [the Syrian] conflict is well beyond what I think most people understand,” he continued.  “The viciousness is impossible to overstate.”   There's a 10 minute video at that Blaze link, but it's radio audio, an interview with Sexton from the region.  Listen to it.

There are no good guys.  It's not a war of democratic rebels against a tyrannical government, it's a war to see which evil tyrants get to rule.

Donald Sensing over at Sense of Events wrote it about on Wednesday in "No Justification for Syria Intervention", and goes over both political and Just War Theory approaches to see if he can find justification.  No.


In Syria, however, even if the Obama administration was inclined toward Realpolitik it would find there is no upside for American power interests in intervention. Simply put, the outcome of the  civil war there is wholly immaterial to the national-security interests of the United States. The fight is not a fight between repressed Jeffersonian democrats and their cruel oppressors. It is a fight between what we may understand as a Stalinist regime in power and a fascist movement that wants to replace it.
.....
In fact, the list of places in the world where the US would be morally justified in mounting military action to defend the innocent is very long. But it would be impossible for us to do so. And that requires exercising another principle of war, distinction or discrimination. If not everyone, then who and why? If there is an especially compelling reason we should intervene in Syria and not Lower Zambezi, then let advocates make it. But they do not even attempt.

There is neither a strong moral nor national security case to be made for US intervention. Intervention fails both just war theory and Realpolitik.

But the problems are bigger.  Assad's Syrian government is backed by Iran, their puppet Hesbollah, and Russia.  This isn't the cold war anymore; we don't need to oppose whomever Russia supports.  And it has gotten pretty weird out when Vladimir Putin makes more sense about our choices than anyone in DC.


"You will not deny that one does not really need to support the people who not only kill their enemies, but open up their bodies, eat their intestines in front of the public and cameras. Are these the people you want to support?," Putin told a news conference.  [Note: Intestines?  It was his heart, Vlad.  Still, you're 95% right. - SiG]

The Mideast is on the verge of collapse, and it threatens to pull the whole world down around it.


Syria and Egypt are dying. They were dying before the Syrian civil war broke out and before the Muslim Brotherhood took power in Cairo. Syria has an insoluble civil war and Egypt has an insoluble crisis because they are dying. They are dying because they chose not to do what China did: move the better part of a billion people from rural backwardness to a modern urban economy within a generation. Mexico would have died as well, without the option to send its rural poor - fully one-fifth of its population - to the United States.

The best case here appears to be that two sides declare a draw and go back to living in absolute squalor - since they've destroyed the country.  Possibly, the Syrian rebels could win and it ends up a Muslim Brotherhood state, like Eqypt; starving, squalid, horrible conditions, sliding down into complete collapse.  Possibly an Al Qaeda state.  The other cases go considerably worse, from a wider Mideast war, through involvements that spread to include Turkey, more of Europe, or potentially even World War III. 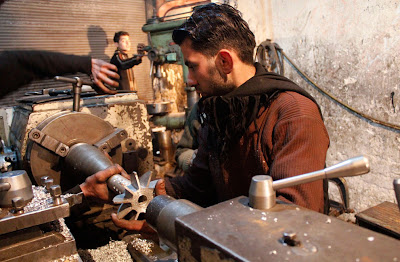 For the last five years, the US has made bad call after bad call in foreign policy.  This is just another.  We are tied to the Muslim Brotherhood to the highest levels of government, to our detriment.  We have no business in Syria.

As someone said, "it's not that the War on Terror is over: it's that we switched sides"