If you're of a certain mindset and a certain age, the name Heathkit is going to get a reaction from you.  You're probably getting all warm and runny inside just thinking about it.

For the rest of you, the Heath Company, apparently still existing in some form, was founded in Chicago in 1926 selling kit airplanes.  Later, (as I've heard the story) when they got hold of some electronic parts that were WWII surplus, they started the electronic kit business that made them legendary, and moved to upstate Michigan.  Most of the people that are all warm about them are thinking "Benton Harbor, Michigan" right about now.

Their designs and products were solid, rarely stellar (all IMO, of course); what sold them was two things.  First, in the days of this sort of assembly, doing the hand work yourself could save you a substantial part of the cost of the electronics; perhaps 30 to 50%.  Second, there is an undeniable moment of magic when you turn on something you built yourself, possibly hundreds of parts and hours upon hours of work, and it works.  As the electronics industry moved from hand-wired, hand-soldered things like this (I actually owned one of these HD-11s!) over to printed circuits (AKA printed wiring boards), the portion of price that was labor went down, reducing the incentive to build the kit.

That said, they produced some products that are still revered in ham radio circles, and some unique items like color TVs with test equipment built in to align the fussy sets yourself.

Over the last couple of years, there have been rumors they're starting up again, and rumors they're not.  They appear to be there again at the expected URL.    And if you're tragically geeky and want to do a very in-depth survey that takes about half an hour, don't tell anyone I told you it's here.

BTW, the first "major" Heathkit I built was this one, when I was 13. 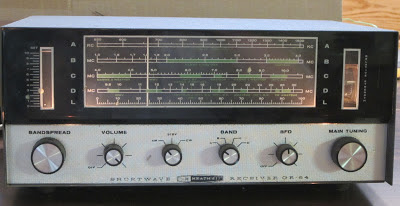