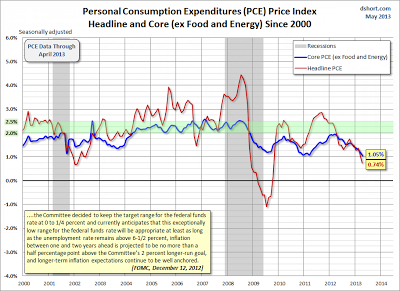 As you can see by the title, PCE is the Personal Consumption Expenditures Price Index. You can also see my main gripe with it: it excludes food and energy spending.  Just like most of the governmental data.

Mish looks at the last year of lowering PCE, calls it "disinflation", and concludes:


...the hyperinflationists missed the boat by a mile.

If there's anything ominous here, it's that personal consumption has been in pretty steady decline since mid-2011.  That's despite the Fed monetizing just over a trillion dollars per year in QE3 and the previous money creation moves.  They've inflated the price of stocks and bonds, but haven't brought about recovery.  Basically, as so many of us have said so many times, the Fed is running out of ammo.  When you create a few trillion dollars out of thin air, the next hundred billion has less effect (see marginal utility function - Econ 101).

This chart says spending on other things is down.  I think the explanation is pretty simple.  Food and energy are inflating in price.  If incomes aren't keeping up with the inflation in those prices, a higher percentage of income has to be spent on food and energy than the other things in the PCE.  If anything, this shows just how misleading it is for the government to exclude food and energy costs from their measures of inflation.

It doesn't mean the hyperinflationists are wrong.  Again, hyperinflation isn't "inflation on steroids", it's economic collapse caused by lack of faith in the currency.  Sellers demand more and more payment until a runaway failure happens.  And besides, this economic mess isn't over.  The real S hasn't even started Hitting The Fan yet.  Wait till the Yen collapses.  Or the Euro.  Or wait 'til anyone borrowing money in the form of government bonds insists on inflation compensation.  The price of the 10 year bond has been going up for a few weeks lately - and there's a clear uptrend since mid '12.  If this keeps going, interest rates are going to have to go up.  The US can't survive interest rates at what they really should be. 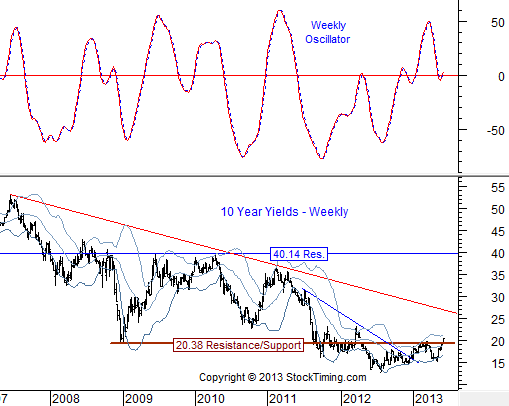 Posted by SiGraybeard at 4:13 PM