I've spent the last couple of days with family, enjoying the holiday together, eating together, joking together.  It has been a nice break.  But if you've been here before, you know that while I may occasionally look away or pretend things are normal, it's not a steady diet.  Even troops on guard duty "take five" now and then.

This being a holiday weekend, the administration announced choking new rules on ozone pollution.  They always announce (or pass) the most strangling, odious rules on a holiday weekend or a Friday before a long weekend because they think the fewest people will be watching.  Calling the ruling about "smog regulation", the EPA said


“It empowers the American people with updated air quality information to protect our loved ones – because whether we work or play outdoors – we deserve to know the air we breathe is safe.”

Implying, of course, that the air currently isn't safe and they have been struggling mightily to improve our lives in the face of awful opposition from ... I don't know... someone or other.

Of course, no one mentions that they've been in charge since 2009, three complete election cycles, and didn't think this needed to be done.  Which obviously means they waited until they thought it would do the least damage to Evil party incumbents.  They were afraid if they announced these rules earlier, it would affect the elections.  Since it's hard to lose much worse than they did, this is a really good time to drop this turd in the punch bowl.  With any luck, the people will forget it by the next elections.

Two big problems come to mind.  The first is that reducing legal ozone levels because it's a component of pollution is like reducing legal oxygen levels because it's a component in seawater and we don't want to breathe seawater.  The second is that the current limit is already just about at the  natural background level of ozone.  In most of the country, it's physically impossible to measure the new limits because the natural background is higher than the level they're imposing!

The reduction, from the current 75 ppb (parts per billion) to 70 or 60 is low numerically, but ozone limits now are already trace levels.  The new levels would put the ozone emissions from completely non-industrial areas out of range!


That's down from the 75 ppb limit set in 2008. While that might seem like a small drop, it would push vast numbers of sparsely populated areas of states like Idaho, South Dakota, Maine, New Hampshire, Kansas, Iowa, Oklahoma, Minnesota and West Virginia — where no counties violate today's standard — into the red zone.

Even Colorado's La Plata County — almost half of which is inside the San Juan National Forest — would violate the new standard.

EPA says it's doing this because "...we deserve to know the air we breathe is safe", right?  They claim they'll reduce asthma rates, but the data from the Centers for Disease Control say that as ozone levels have fallen over the decades, asthma rates have gone up.  Clearly, it's not directly linked to ozone.


To further muddy the EPA claims, asthma rates have risen even as ozone has steadily declined. From 2003 to 2010, EPA data show that ozone levels nationwide fell 11%. But the number of people suffering asthma attacks climbed 26%, according to the Centers for Disease Control.

Furthermore, the rates they're going to mandate are below normal background levels in places like Yellowstone National Park.  Don't know if you've been there, but aside from the smell of sulfur in a few places, it has absolutely pristine air.  Howard Feldman of the American Petroleum Institute said last spring in a study of possible coming regulations:


“… we don’t know how to get to these levels. These levels are levels that are at or below peak background. Background levels at Yellowstone National Park are 66 parts per billion, background. … Background at pristine locations is 65, 66, 67 (ppb). It means we have very little ability for our society to operate the way it normally does. … Our society does have some emissions, but that is the cost and benefit of our modern society, where we’re able to have the amenities and the social life that we like. So there is some impact on the environment. We’re talking about reducing that (head)room to almost zero.”

Many industrial processes produce ozone, just as many natural processes do.  It's easy to think they're trying to shut down every power generation plant and every factory in the country.  They're just evil enough to think that's the thing to do. 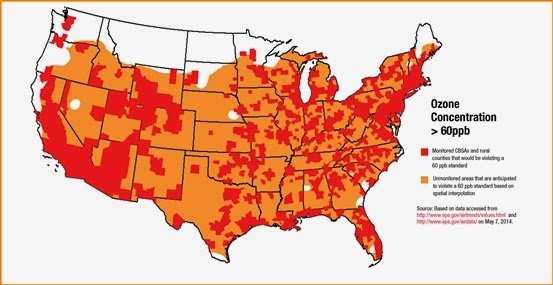