The election is over.  Control of the Legislative Branch of this Broken Republic goes completely to the Stupid Party, leaving the Evil Party in control of just the Executive Branch, and it's hydra-like network of regulatory branches.  Cut off one head, kill one branch (as if...), and two more spring up to take its place.

One of the themes of this blog is the Over Regulated State.  All I'm hearing from the newly elected "Leaders" is talk about the big things they're going to do; in my mind, it would be better if they spent the next two years throwing out every piece of legislation the administration passed. For each page of federal law passed, it has been generalized that 10 regulations are created.  The Code of Federal Regulations is so complex that lawyer Harvey Silvergate points out that every adult in the country probably commits three felonies a day.  The Heritage Foundation estimates that compliance with the increasing number of regulations sucks billions of dollars out of the US economy, with Obama's administration the most regulatory in history.


For the last five years, the president has aggressively exploited regulation to get his way. In fact, the Obama administration is very likely the most regulatory in history, issuing 157 new major rules at a cost to Americans approaching $73 billion annually.

On the good side, a favorite of mine, Mia Love from Utah, was elected to the US Congress.  A black American woman of Haitian descent with an inspiring life story (and one who will show you her citizenship papers), she is a well spoken advocate for free enterprise and self-reliance.  I first wrote about her when she became widely known after a great speech at the 2012 RNC - and the hypocritical leftists slandered her insanely.   We all know that conservatives and Tea Party voters are not the misogynistic racists that the left has been painting forever; these are the people who elected Mia, Tim Scott from South Carolina, Elise Stefanik, the youngest woman ever elected to the House of Representatives.  Maybe this will start to be recognized by the Media? Not a chance.  But it's being noticed where it counts, among the people.

On the other hand, that disgusting pile of corruption in Colorado, Governor Hickenlooper got re-elected.  So he takes Bloomberg's money, tramples on the rights of law abiding Coloradans, and pays nothing.  The people of Washington approved I-594, the law that redefines transfers in terribly oppressive ways, creating a statewide gun registry in the process.  And not 24 hours after winning, announced they were going after more anti-gun regulations.  Most of my readers are also gunnies, but for those that aren't, "transfer" is a very specific legal term in firearms: the transfer of ownership and responsibility for the firearm.  Until this law, a transfer was thought to be permanent; essentially just a sale.  Sold under the usual lie that criminals use "gun show loophole" and private sales to get their guns, 594 makes every personal sale need to go through a background check and registration.  That's bad enough, but 594 goes even further and makes a transfer out of something as trivial as loaning a gun to friend for a class or even at the range to shoot a magazine to see if they like it.  Every simple act like that becomes a transfer under 594, requiring a trip to a gun store to fill out paperwork (it's unclear to me whether or not this is the ATF form 4173, and a NICS check), and I'm sure paying the gun shop to do so - there is a use tax that goes to the state, too.  The Vote No on 594 group that sprang up to oppose this writes:
I've read that if you were to go on a business trip and leave your guns at home with your family, it can be argued you need to do a transfer for every gun, complete with trip to the gun shop.  When you come back from your business trip, you'll need to transfer them back to yourself!

There were other good things and bad.  At best, we are still a Broken Republic.  Guys like Mike Lee, Ted Cruz, Rand Paul, and the new crop including Mia Love, Tim Scott, and Tom Cotton, are all saying the right things and (at least in the case of the first three) trying to do the right things.    Going through the thousands of pages of Obamacare, Dodd-Frank and the other major turds passed in the last six years to repeal them, including going through the places where tendrils of these laws extend is not glamorous or sexy (part of Obamacare was written into the TARP law, a full year before the real Obamacare passed).  But it needs to be done. 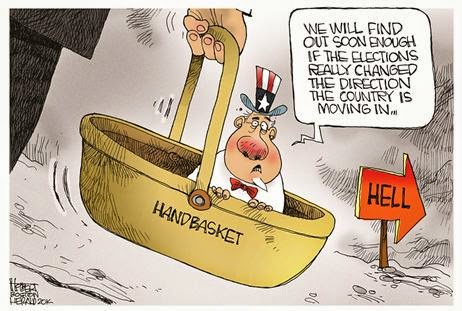