There's a wise old saying I encountered in test engineering back in the '80s: there is nothing more frustrating for a technician than to realize the problem he has been troubleshooting is in the equipment he's troubleshooting with and not what he's working on.  I have a drawer full of those Tee shirts, and I think I got another one today.

That was a few hours out of the day. I have a 12V 35AH battery, a sealed AGM lead acid, that I keep around for general backup use.  My plan is to use it with my small solar panel to keep it charged, but mostly it just sits around.  Friday night I decided it was time to put it on a charger to keep it topped off.  To my surprise, it timed out the little charger I was using at 300 minutes (5 hours) without saying it was full.  That made me think it needed to be cycled down and back up, so on Saturday I hooked it up to a load: an AC inverter and 100W bulb.  100 W at 12V is about a 8 1/3 amps, so with inefficiencies and all, it should discharge for 3 to 4 hours.  The inverter cut off in no more than 2 hours.  This time the smart charger said it was done after putting in just a few hundred mA, which was way too little.  So today I thought I'd give it a load which I could measure current through and rigged up a combination of some stuff (including a spool of wire which drew an amp itself) and drew 2 amps for three hours.  6AH - should put a dent in the battery, but not deplete it.  To my surprise, it was measuring 11.3 V at that point, just about stone dead.  Again, back on the little charger and it put about 3 AH into the battery and said it was done - but a voltmeter read 11.88 V, which is about 30% charged.  This time I switched over to a better charger, and this one said 30% charged and started working on it.

So I've probably been troubleshooting the charger (one of these under a different brand name).  Most likely.  The behavior of the battery was still suspicious, but sometimes you need to discharge them deeply and recharge.  Since I was believing the little charger until the last bit of troubleshooting, maybe that's the only problem.

While waiting for the battery to discharge or charge, I was working on another little project, a new spinning rod.  This was prompted by noticing the one I had been using was rusting in places (a saltwater rod should never rust).  I get the regular catalogs from Mudhole (no affiliation, just a customer, YMMV, best if used before...), and picked up an MHX graphite blank, along with the parts to make it to my taste.  I finished all the wrapping and trim (probably...) and now just have the epoxy finish to apply. 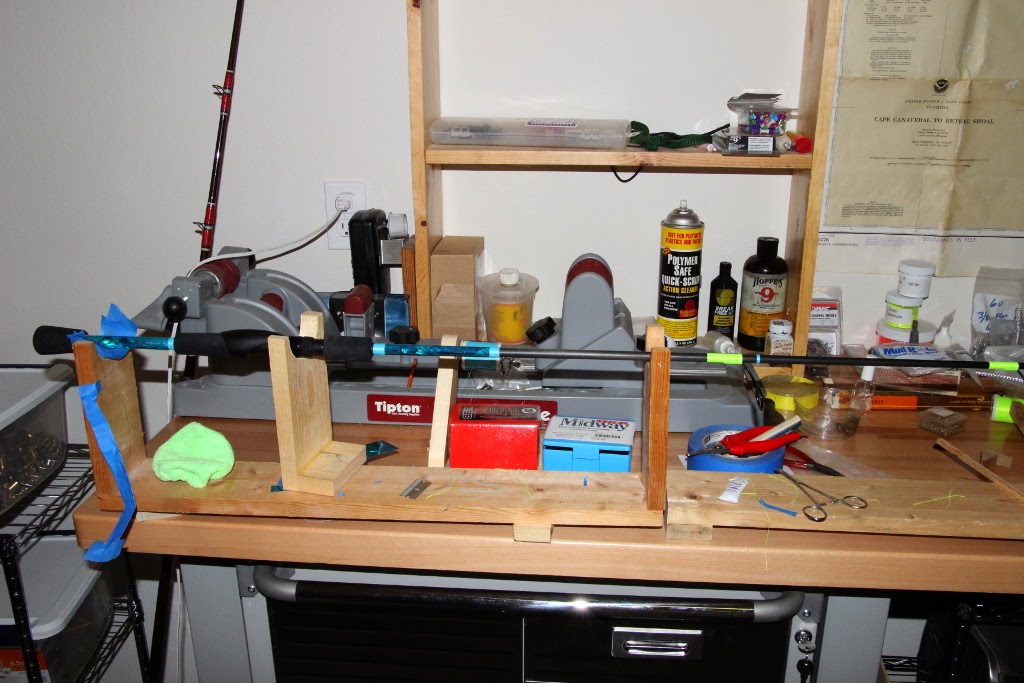 The blank is black, and I decided to finish it primarily in a bright neon green, like MHX's logo, but with a little light turquoise trim.  Here it is on my little rod winding setup.  The unusual thing about this rod (for me) is that I found this 3M sheet abalone to do some fancy looking trim work with.  So I got a couple of pieces of this stuff in a color called "angel wing teal" and tried it for the first time.  This is a rod with an EVA foam handle that leaves a few inches of bare blank between the grip and an end cap I'll probably stick in my gut to fight fish.  It got a piece of this, as did the area where I ordinarily put a decorative thread wrap.  It's nice looking stuff.  Fragile, and cracks easily, but I understand there are actually thin layers of abalone shell in there, and I don't think that's flexible. 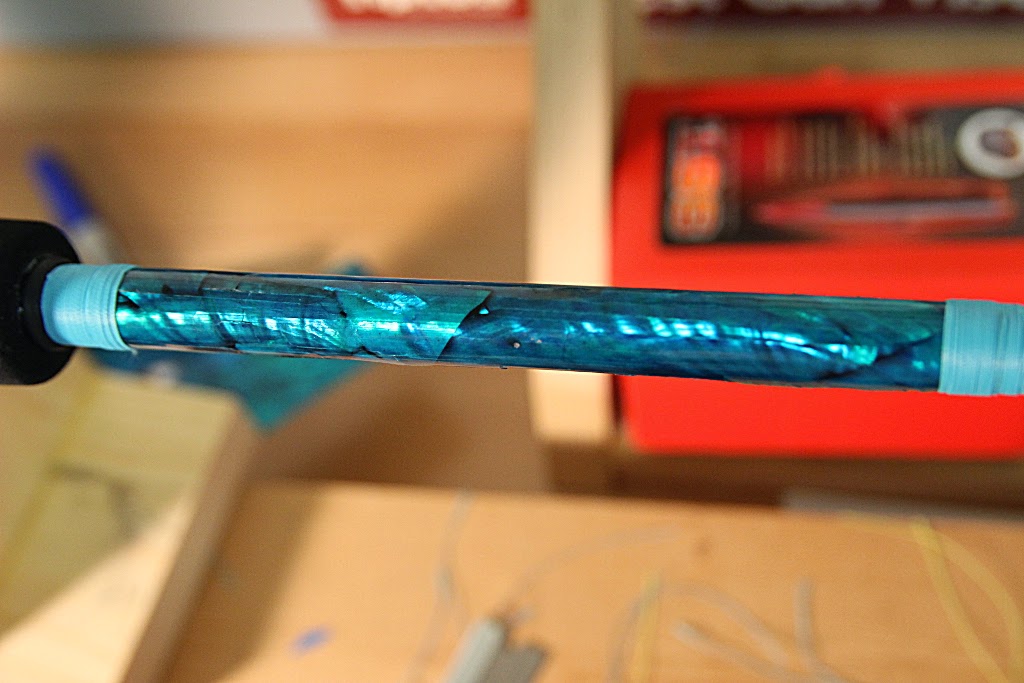 Add in some time wasted looking at football on the tube and BAM! back to work in a few hours.  Thankfully, I get a short week this week.