The Face of Ferguson

Hat tip to Sense of Events for this heartbreaking photograph from Ferguson. 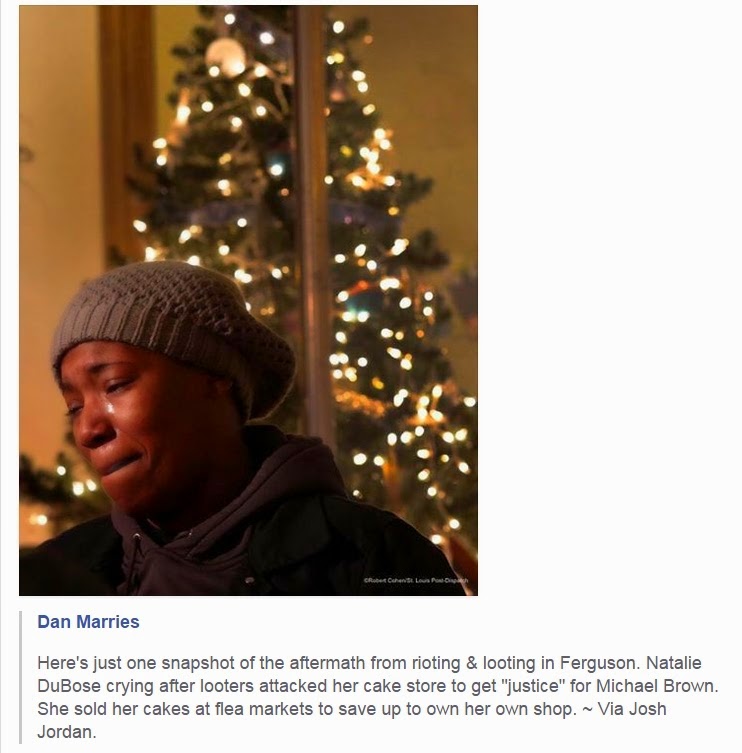 Natalie DuBose, the single mom and single proprietor of "Natalie's Cakes and More" worked long and hard to open a store of her own, and a rioter broke in her front window, destroying other property as well.  If the profiles are any indication, probably someone who isn't from Ferguson.  Probably someone hired to be there by any number of rent a goon agencies there trying to implement the final Cloward-Piven push that destroys society.  Despite the setback, Natalie isn't giving up.

The shop's main window is "busted out completely. They threw a chair in it to bust it out ... It's a big mess," said Dubose, who opened Natalie's Cakes as recently as June.

Despite the mess, however, Dubose says she will continue to bake. She can't afford to give up now, having invested all she had into a business that was funded through bake sales at flea markets.

"I am a single mom, a mother of two," she said. "This is everything that I own. I can't walk away from it. I just got to start up and start baking again."

Poverty doesn't cause crime just like poverty doesn't cause riots.  Crime causes poverty and riots.  Only the hardiest will stay in a place where they have to rebuild their business or recovery from robberies and other crimes.  New businesses will think long and hard before going into a neighborhood like that.  Over time that ensures the poverty of an area.