A couple of times in the life of this blog, like here, I've mentioned that the woodworking tool industry is in crisis due to a liability suit over table saws.  For a summary: (slightly edited)


In 2010, a lawsuit was won against Ryobi tools' parent company, for producing a "defective" table saw.  The plaintiff was awarded $1.5 million when he sued for $250,000.  The defect?  It didn't include an expensive safety option that was invented around year 2000 and only on the market a couple of years at the time of his accident; (the modern tilt-arbor table saw was invented in 1939; the basic idea goes back to 1813).  In 2000, inventor Steve Gass produced a technology called a SawStop that senses when flesh touches the blade and stops the blade in milliseconds.  In the process of stopping the saw as fast as it does, it destroys the saw stopping block, sometimes the blade and possibly other parts of the saw.  The user still gets cut, but typically only a minor cut that might require stitches instead of having a body part cut off.  The inventor shopped this safety to the major tool makers and none of them agreed to license his invention.  Their major concern was that the idea was untested; they had no idea how durable it would be (contractors' tools live a rough life); they had no idea if it could be added to existing products, or how to roll it out across their product lines.  The inventor started his own company in 2004 selling tablesaws with this feature.

Got that?  Ryobi (well, the company that owns them) was punished for not including a safety device that didn't exist when the saw was designed.   As I concluded in that 2010 article, "This suit will end the production of low-priced and bench top table saws, seriously impacting hobbyist woodworkers as well as the tool industry.  Professionals will buy the more expensive saws and raise their prices to you and me."


The $1.5 million in damages awarded in the Carlos Osorio tablesaw case seemed destined to be overturned, considering the facts of the case. Not only was it upheld yesterday, but the Consumer Product Safety Commission voted to propose a tablesaw safety standard that would mandate that saws all sense fingers and retract their blades instantly. The implications for the industry are massive.

There's quite a long story behind this at the Fine Woodworking link; the suit has been in process since '06, and has long turned into insurance company vs. insurance company (subrogation).  On October 5th, the CPSC voted 5-0 to look into requiring tablesaw manufacturers to include a device like the SawStop on all of their saws, and since SawStop owns about 70 patents, if they rule this way they're essentially requiring every manufacturer buy from SawStop.  The Power Tool Institute estimates this could quadruple the cost of an entry level table saw.  Further, as the Fine Woodworking article says, no one even knows if the SawStop can be fit to smaller, bench top saws.

As I said a couple of years ago, this isn't about safety and "the right to cut my finger off" as Steven Colbert puts it.  Tablesaws are dangerous machines, made worse because many users defeat the safeties on the saw (as Carlos Osorio did - he started this long chain of lawsuits).  It's about how a manufacturer can be found to be producing a "dangerous and defective" product for not including a feature that didn't exist when the product was designed. Lawyers to the contrary, we can't go back in time and take the invention with us.

It's widely reported that around 4000 people every year are sent to the ER with a traumatic amputation from a tablesaw.  Nobody wants that.  The question is the best way to prevent injuries.  Should the government step in and mandate all saws have this technology?  No one knows how durable these are going to be, how long they'll last and how well they'll hold up to the rough life of a workman's saw.  Part of the reason there are so many injuries now is that the safeties currently mandated for these saws are routinely removed or defeated.  Will this one sit there quietly for 25 years waiting for the time its needed and then snap into action, or will some circuit element open, rendering it the worst kind of safety: a false sense of security? 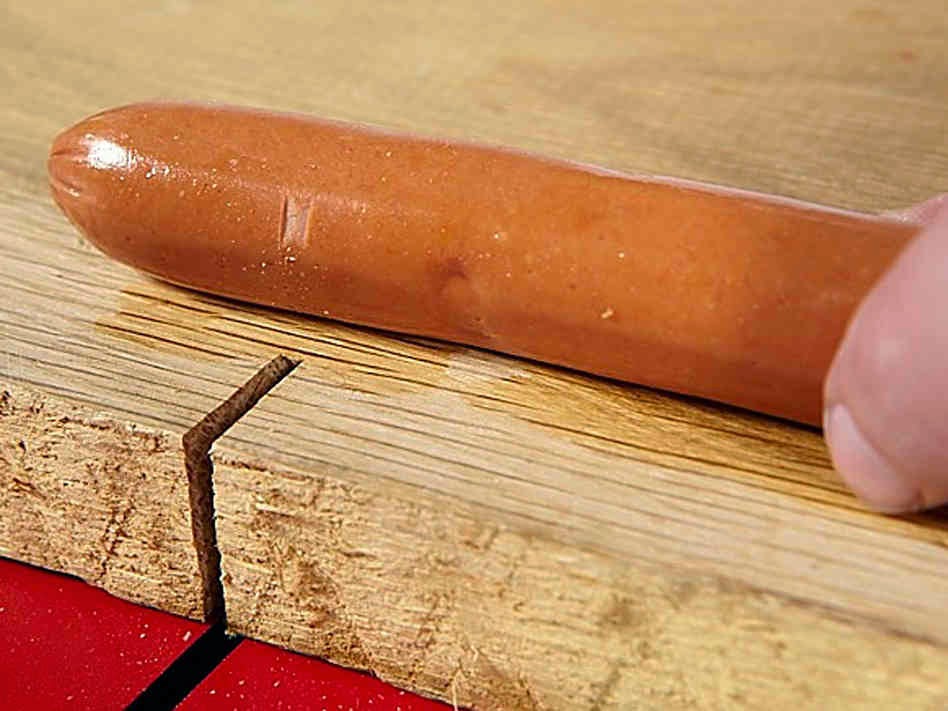 There are tons of pictures of the SawStop hot dog test online.  This one is from NPR, who (predictably) want the government to mandate it.