What's Up With the Precious Metals?

Heck if I know!

Unless you don't pay any attention to precious metal prices at all (in which case you're kinda out of place around here) you know that prices have been in the tank lately.  Gold closed at $1168/oz Friday and has been struggling to clear $1200/oz since mid-October.  It hasn't seriously challenged $1400 in the last year.  What's significant about that?  Just that analysts conclude that the


"all-in costs of gold producers are now above $1,150/oz, even after big cost reductions and a focus on higher-grade mining. If the price drops to $1,000/oz, there will be many shutdowns. The industry needs a price of at least $1,400/oz to support sustainable production, and that number will rise, as early as 2015 or 2016."  It's progressively harder for gold miners to mine profitably at today's prices, and that gets worse as the world's central bankers create more and more inflationary pressures on the dollar.

Silver is just as bad.  The number of ounces of silver it takes to buy an ounce of gold (or the number of silver ounces 1 oz of gold will buy) is 75.4.  Historically, that's on the high end of where it ranges, but not an all time high.  Here's your kicker: the average silver to gold ratio from 1687 until now was 27.28, just about a third of what it is now.  The ratio went above 40 in 1984 and has only rarely gone below 40 since then.  A high ratio represents either historically cheap silver or expensive gold - but the preceding paragraph explains that gold is almost selling too cheaply to mine.  To me that implies gold is cheap, and silver is full-tilt-bozo, ridiculously, crazy cheap. 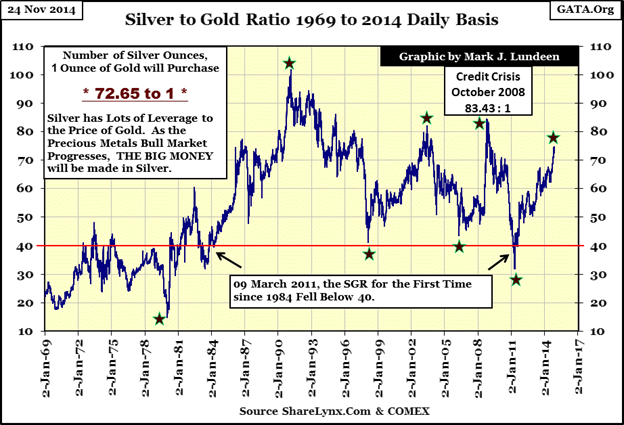 Silver has been in a down trend since mid 2011, although a couple of those vertical price drops came from the commodity markets changing the their rules.  It was almost net zero movement since May of '13, but the last couple of months have been brutal.  With "above ground" supplies of almost a billion ounces (978 million), more than last year, and the economic forecast for slowing growth worldwide (if not outright global recession) the price of silver seems to be caught between the strangely resurgent dollar strength and the investors eying the white metal more as an alternative currency than as an industrial investment.  Silver's price correlation to gold is 0.82 (1.0 being perfect... and never seen); its correlation coefficient to industrial metals is 0.27.

So if there's so much silver around that you can get all you want, spot prices are in downward spiral and the price of silver is prices last seen in 2009, you might think this is a good time to go buy some.  I know that a year or so ago, 90% junk silver coins (90% silver US coins from 1964 and before) sold for about a 6 or 7% premium over spot price.  Tonight, checking the cheapest junk silver coins, I find the premium is closer to 17%!  I thought supplies were so high we were tripping over silver.

It's widely thought that the spot price is set by paper traders who have nothing to do with producing, or really buying actual metal.  Keith Neumeyer, the CEO of First Majestic Silver took the bold move of holding back 35% of his company's silver production rather than sell it at the paper trader's price.


Now, Mr. Neumeyer has taken things a step further by suggesting that silver miners should form a semi-cartel and hold back sales of their production in order to break the backs of the paper manipulators. He encourages all miners to hold back silver, pick a month, get together and hold back silver for 30 days, putting out a news release collectively. The goal is to call the bluff of the paper markets, which trade over the entire year of global production in a day. First Majestic itself is a small fish, but imagine the impact if a few of the top producers joined in the effort and physical supplies tightened.

Attempts to manipulate market prices are widespread, and metals investors in particular are very loud about it.   The current extremely low price of oil (closed at $65.99 Friday) is said to be an attempt by the Saudis and the Russians to collapse the US shale oil resurgence.  Both Saudi Arabia and especially Russia need the price to be closer to $100, but the combination of the US energy production improvements and forecast for lower demand have helped pressure prices lower.  The point is, anyone who can try to influence commodity prices will.  Still, it's widely reported that despite the large number of above ground ounces, the important part is that demand for that above ground silver exceeds supply, which should imply the price can't be held down too much longer.

As always, the real question is what the future holds (and long time readers know my answer usually starts with Bohr's quote).  As I said before, 90% silver coins have jumped a lot in price compared to the spot metal price.  The US Mint regularly sells out of silver eagles.  Combine that with silver producers trying to raise prices.  My view is that the separation of price for physical metal vs. the paper price means that sellers are just plain refusing to sell at that paper price.  If you really want the silver, you'll pay more.  That tells me there's a fundamental stress in the market that will only be relieved by silver going up in price.  I expect next year to be better than this year for the metals.

Standard disclaimers apply: I'm just some dood with a blog on the vast Sargasso sea of the net.  YMMV.  Under penalty of law, do not remove mattress tag.  Professional drivers on closed course.  No animals were harmed during the writing of this blog (although one white cat was annoyed that I wasn't paying enough attention to him).