On This Day Yesterday In History, 1909

I saw posted on electronic trade magazine EDN's "This Week in History" page that on  November 1, 1909, "The Machine Stops" was published in The Oxford and Cambridge Review.  I had never heard of the story, but I understand it's still read in some college classes.  I downloaded a .pdf and read it yesterday around doing other things.  At 25 pages, it's a an easy and good read.  I didn't post this yesterday, because I hadn't read the story, and didn't know if I wanted to recommend it to you.  I do.

"The Machine Stops" is technological apocalyptic fiction.  To borrow from the EDN story (first link)


The story follows a mother and son who live on opposite sides of a world where humans live in underground cells because they can no longer live on the surface of the Earth. The cells have buttons and switches to request everything one might need and communicate through systems similar to modern instant messaging and videoconferencing.

The global Machine is a system everyone uses to access electronic information from their cell, reminiscent of the Internet. The only actual books are instruction manuals to operate the cells, and all forests have been destroyed.

In a time where radio was just coming around, Forster predicted technologies still decades, if not a whole century, away.

It opens describing the mother, Vashti, as "a swaddled lump of flesh" and "about five feet high, with a face as white as a fungus".  Unmentioned years of living almost completely inert lives has left people unable to do almost anything for themselves: the Machine supports life in every way.  Their goal in life seems purely "ideas" - new intellectual pleasures.  They don't want experiences.  They don't want first person reports of historical events.  They want to be as far removed from those events as possible: "Let your ideas be second-hand, and if possible tenth-hand, for then they will be far removed from that disturbing element — direct observation".  Being human, with that innate urge to worship something, they begin to deify the Machine, even though men built it.  And even though men built it, and everyone had but one book, about the Machine, as the Machine slowly disintegrates, so does human life slowly disintegrate with it.

It's a good read, really ahead of its time for 105 year old story.  And as a Science Fiction Hall of Fame story, it has been made into visual productions, movies and TV shows, so that someone else's imagination of how everyone and everything looks replaces your own imagination.  This image is from the BBC's 1966 TV Production. 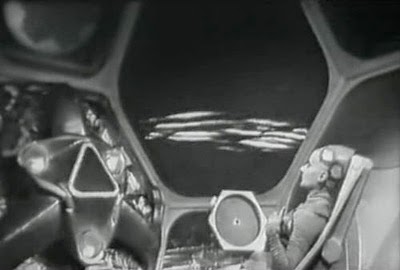