Thanks to No Lawyers - Only Guns and Money, I get a link to a good discussion about Washington's I-594 initiative I wrote about the day after the midterm elections.


Thus, when I read this post from Hyperion 1144 on Reddit, a light went off. The goal of Bloomberg wasn't universal background checks. It was to kill the gun culture in America by strangling its ability to bring new adults into it. We always say that taking someone shooting is a great way to inoculate them from the claims of the gun prohibitionists. If that is made too hard by the restrictions on transfers in I-594, then we can't achieve this inoculation.

Over the top?  Commenters on the post go from agreement to a cheery optimist whose argument seems to reduce to "these bad things haven't happened yet, so stop being alarmist" - which might make sense if the law wasn't passed under two weeks ago and still isn't even in effect.

The original link John pointed to on Reddit thinks of I-594 in ways I've not seen anyone else express:


I-594 is a not a tactical move by gun confiscationists, it is a strategic move.

... Washington has passed Initiative 594, a law marketed as requiring background checks on all sales, but which in reality has criminalized the act of touching any gun you do not own. This means that if you don’t own a gun in Washington State, it is now illegal for you to touch a gun.

... I-594 is literally a legislative vaccine against the spread of gun culture.

The only way to learn, now, is to buy a gun and learn by yourself, completely on your own. No one can help you, since they can’t touch your gun and you can’t touch any of theirs. This law is intended to isolate us, to prevent us from spreading ideas, knowledge, information, culture. This law, played out of over years and decades, means that gun owners are now likely limited to two pools of people in the future:

1) The children of gun owning families.
2) The rare, entirely self-motivated individual who is willing to trek into an unknown world completely alone.

Played over years and decades, this is how you slowly disarm a population without getting substantial complaints from that population.

Now, virtually all non-familial acts of teaching and culture-sharing are illegal. In the long-term cultural sense, I-594 is the single most dangerous piece of gun control legislation ever conceived.

It makes the NFA and the Clinton Assault Weapon Ban look childishly simplistic by comparison. This time, they didn’t ban certain mechanical or cosmetic features. They didn’t ban full-auto or select fire or short-barrel rifles.

This time, they banned a culture, our culture.

If this stands or spreads, we are done for.

Insidious is the description that comes to mind.  It may be an exaggeration to say it's illegal for a non-gun owner to touch a gun, or for an owner to touch another person's guns, but I'm frankly not sure.  Likewise, it may be an exaggeration to say gun classes and rentals have been outlawed, but I think there's more of a case for that than for the first.  You get into trying to parse exactly what the Lawmakers intended when they wrote it.  For example, the new laws on transfers don't apply to:

If you're putting on a pistol class, can your students fire your guns?  It seems they can if you're at "an established shooting range authorized by the governing body of the jurisdiction in which such range is located", but if you're in a class room that's not part of that shooting range for discussion before shooting, I don't think they can legally touch your guns.  Now look at that paragraph and tell me if it's legal to loan a gun to your 19 year old daughter for a few months, when you're not on an established, authorized range the whole time.  I'd say, no.

I know there are lots of armchair internets lawyerz who say don't worry, it will be shot down by the courts but that raises two immediate and significant problems.  First: it's going to be expensive.  How would you like to spend $10 or $20,000 of your own money fighting the interpretation of some clause?  Do these people think going to state courts and state supreme courts is cheap and easy?  All you need is some zealous state prosecutor who thinks they can up their winning percentage by shafting you and you're going to be spending that kind of money, unless some national organization gets behind you.  Second, how did that whole "the courts will declare it unconstitutional" work out for you on Obamacare at the Supreme Court?  You can't count on judges to do the right thing.

John does a follow up piece on places likely to face something like I-594 in the next couple of years.  It's already happening in Nevada; who else is going to be in Bloomberg's crosshairs?  (Image thanks to Miguel) 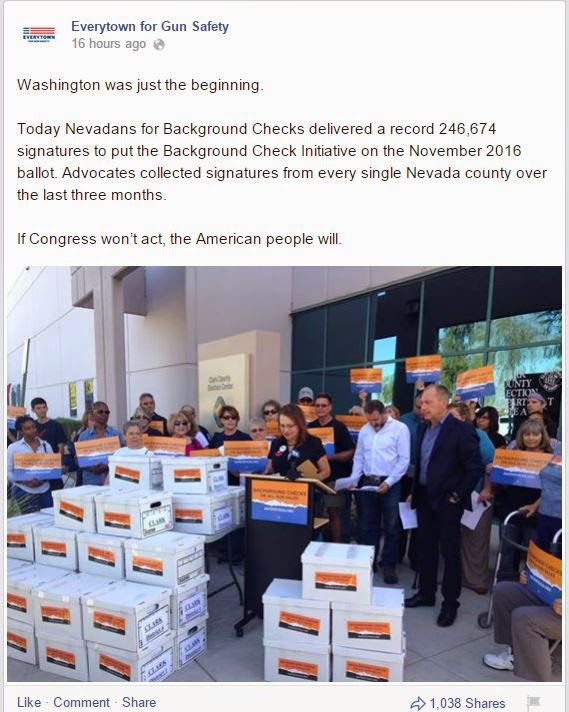