Getting Started With An 80% Lower Just Got Easier

I'll bet that a lot of you probably get the Sportsman's Guide ads all the time like I do.  They're undeniably a big player in surplus sporting goods sales, and when you combine that with their Truck Monkey truck accessory business, and 365 Outer Wear clothing business, they seem to be a pretty big retailer.  I've been one of their club members off and on a few times, but I just don't buy more than a thing or two from them yearly.

I noticed something in today's email that I've never seen before.  An 80% lower for a 1911.  It's aluminum rather than steel, so consider that, but 80% pistol lowers are hard to find.  I know of only one source, KT Ordnance of Montana. 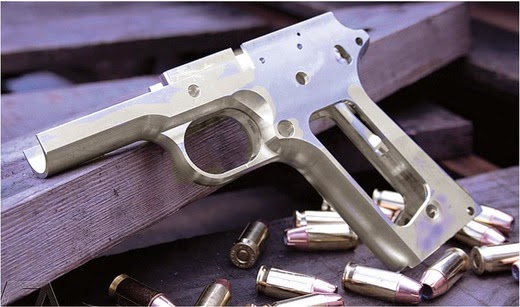 A little farther down the page, they have a listing for a lower receiver jig kit, and you need to read its page closely to see that it includes the lower receiver as well.  To complete either, you need to drill a couple of holes and cut the frame where the slide rides.  It seems a little harder than an AR lower, but that just may be because I don't quite know how to do it yet.

AR Lowers?  Yeah, they have those, too.  Including a kit with the jig and even the necessary drill bits.  I think this could be done completely on a drill press.

I've been thinking of doing a 1911 just to get the experience of building one from a pile of parts.  Could be a fun project for the summer when you don't really want to be outside around here.  (For my friends in Hoosieropolis and points north, think winter project).

I don't want to take away from the guys at Colfax Tactical (aka Redmond Black Rifles), where I bought my one 80% lower.  I think they're great guys to work with.  Likewise the guys at Ares Armor,  or Advanced Rifles.   All of them are The Good Guys who have put up their own money to create businesses producing these parts.  On the other hand, I'd bet just about anything that Sportsman's Guide isn't manufacturing these lowers.  They just bought some and they're trying to sell them.  Somebody else made them, maybe one of the above.   Sportsman's Guide just has the means to get these parts in front of more people than the manufacturer, thanks to their fat retail channel.