Why You and I Won't Get Social Security

I know I've said here that once I learned how social security was being run, I figured I'd never see a penny of my life's contributions.  Social Security is going bankrupt and will be drastically re-structured.  I can imagine some people will see this as my accepting defeat and not fighting for my due.  I see it more like recognizing reality and dealing with it.

A few weeks ago, Gunslinger's Journal ran a good quote about social security.  The Cliff Notes version is:


The "problem" is not old people; the problem is embezzlement by a Congress and federal government that cannot keep its hands off our money. It took our savings, spent it, left behind lots of IOUs, and extended benefits to millions that did not pay into the system.

The problem with social security is that it was embezzled by the fed.gov leviathan.  There is no lock box and there is no money there for us.  The system pays out what it takes in from current workers.  But just like the chances of retrieving anything from Bernie Madoff to pay off all the investors he stole from is zero, you could imprison every member of the federal government and take their pay and you still won't pay the social security recipients.  The. Money. Isn't. There.

One of my favorite financial guys, Karl Denninger, has an excellent summary with just enough math to show ugly the situation really is.  Illustration from the article. 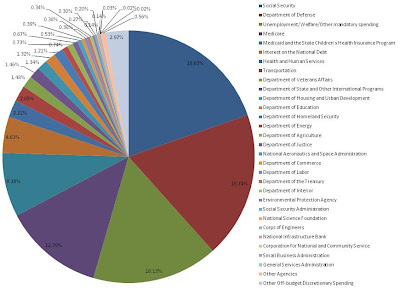