A Modest Proposal About Energy

Energy is the universal currency of human transactions.  All transactions between people and their societal structures reduce at their lowest level to transactions about energy.  Think about it: what's the most fundamental of your needs?  Food and shelter.  What is food other than energy to run you?  How do you build your home?  If you pay for anything, the transaction reduces to food, shelter and necessities for the other party.  What does your house run on?  Your car?  You have an electric car?  Nowadays, it's best to think of your Volt or Leaf as a coal-fired car, because if you're in the Luddite States of America, your power comes from a coal-fired power plant.  That electricity to charge it has to come from somewhere, you know? 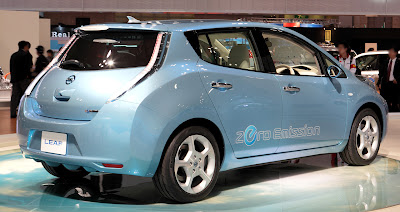 The Nissan Leaf, the most popular totally coal-fired car in America. Zero emission?  Maybe from the car, but that's because they don't carry their primary power source, which has plenty of emissions.

Today, Western Rifle Shooters Association has a link to a story on the coming energy shortages as we go past peak oil.  As I said some time ago, "If there was a free market in oil, I'd say, "peak oil, schmeak oil - I don't care", because all that means is that as oil gets more expensive, other sources of energy will replace it; and it's not like oil hasn't been getting more expensive for the last 40 years, anyway."  Allow me to make a modest proposal.

The US Navy has powered large surface vessels with nuclear power for around 50 years.  There has never been a major failure of a Navy reactor.  We power ten aircraft carriers, and many submarines.  The latest and largest model reactor in an aircraft carrier appears to be the A4W, capable of 104 MW each; two of these powerplants go into a Nimitz-class "supercarrier".  These nuclear reactors are specified as a product, not as a custom assembly; that is, A4W is a catalog designation in the military stock system that they order to buy these. A designates a surface vessel, 4 is the fourth generation reactor design, and W is the prime contractor who builds them, in this case, Westinghouse.  It is important to know that every nuclear-powered vessel has a crew of young adults who run them and keep them trouble free.  There has never been a serious issue with a reactor on a US Navy vessel.  No reactor meltdowns, no vessels being sunk by their reactors.  It is possible that was the root cause in the loss of the submarine USS Thresher in the 1960s, but we don't know that, and it obviously used an old, long-ago replaced design.  It's also possible it sank due to pressure failure of its hull.

How much power is 104 MW?  A typically sized American house probably consumes, at peak, in the vicinity of 20 kW.  104,000/20 is 5200 homes, which says a residential town of around 15,000 people could be powered by one of these reactors.  In reality, you rarely run your house at full capacity, so more houses could run on one of these reactors. Two of these reactors, the complement on a Nimitz, could power a town of 10,000 homes.

Although there are undoubtedly restrictions on the ability to buy them, let's assume the legislation to allow them to be sold to private concerns could be passed.  The only thing that would prevent wide scale construction and distribution of these reactors is the public's irrational fear of nuclear power.  The expertise to manage them is widespread, with many Navy veterans having run them successfully.  More can be trained with the existing Navy training materials and classes.

We can either mope and complain about energy getting more expensive, and gripe about losing our quality of life, or we can face the problem head on, and maybe get a jump on our troubles - for once.  As Alvie over at the Cliffs of Insanity says, "which way are you facing?"
Posted by SiGraybeard at 8:33 PM