Poppin' a Cap In the Nanny's Ass 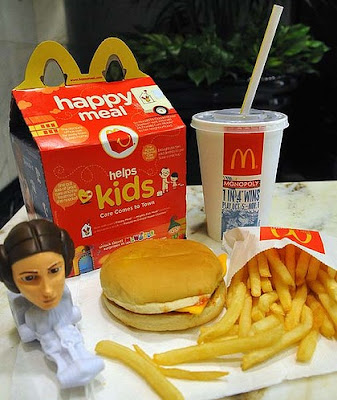 The Nanny State is at it again.  The first Nanny-ism I commented on was the Fed.gov's ill-considered war on salt.  Then, of course, there's the First Lady's attack on children's menus.  Now, I'm sure most of you saw that the San Francisco Board of Supervisors has banned any child's meal that comes with a toy: McDonald's Happy Meal is the archetype that got the headlines.


"Supporters of the ban claim it will help protect children from obesity, while opponents see it as just the latest example of the nanny state run wild and say it's the parents' right and responsibility -- not the government's -- to choose what's right for their children."

I'll take B.  Allow me a slight detour first.

Down on the lower right of the top this page is a small, random selection of perhaps 20 books I've entered into the Library Thing web site.  One of the books that will show up from time to time is "Good Calories, Bad Calories" by Gary Taubes, a science writer who has won several prestigious awards in that field: his article "The Soft Science of Dietary Fat" turned the popular perception of this area on its ear.  As someone who has fought the "battle of the bulge" since I was about 15, I've been studying this subject in as much depth as I can for as long as I can recall. "GC/BC" is a very well researched look at much of the common wisdom about diet; about the dangers of eating fat, the role of westernization in the spread of disease, and how the culprit might well be refined carbohydrates rather than fats.  If you have any interest in this field at all, it's really a good read.

Getting back to the Nanny State, what they won't tell you is that these sorts of efforts have been ongoing for some years now and they are not effective.  If you take the french fries away, kids don't magically get slimmer.  You can really eat anything, anything, and lose weight if you follow some common rules. CNN reports on a professor of nutrition who ate a junk food diet, of " Twinkies. Nutty bars. Powdered donuts.", and lost 27 pounds.

"For 10 weeks, Mark Haub, a professor of human nutrition at Kansas State University, ate one of these sugary cakelets every three hours, instead of meals. To add variety in his steady stream of Hostess and Little Debbie snacks, Haub munched on Doritos chips, sugary cereals and Oreos, too."

Adding interest to the story is that many of the blood tests routinely run to monitor health improved for Professor Haub.  The good Professor is reluctant to say he's healthier, but your blood doesn't lie.  If the numbers mean anything to begin with, if you improve the numbers, you've improved your health.

A simple explanation is that losing weight probably made these blood profiles better.  As I pointed out in my long piece on corporate wellness programs, these indicators don't show that you're "well" so much as they point out that you're young and healthy.

It doesn't matter that the Nannies behind the Happy Meal ban are well-intentioned.  Banning toys is not going to have the desired effect and personal liberty continues the long slide down the drain. Obesity is a big, complicated topic, and simply removing options is not going to fix everything.  I always get the feeling that these nannies would walk into a village in the third world with people lying around starving to death and think, "my, look how nice and lean they look!"

Perhaps the best introduction to the topic of obesity for the intelligent lay-person is Adiposity 101, a continuously updated paper online since the early 1990s.  It might just turn some notions of yours upside down.
Posted by SiGraybeard at 10:43 PM