Well, I think it's a lower receiver. At this point, if I was to buy it, I would need to go through an FFL. 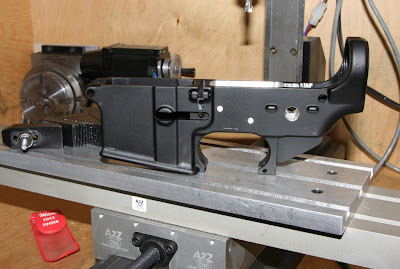 As you can see, no engraving, and that's what's left to do before I assemble it.  As I talked about in comments to the earlier posts, Mrs. Graybeard thinks we should name it after our cat Moe and label it "Moe Guns", because who doesn't want Mo Guns?  Also, as I said in the prior posts, it's easier to give it a serial number even though that's really not required unless I sell it.

The milling was straightforward, once I had the limits of the motions programmed.  To get those points, I used the drawings that Colfax Tactical includes with the forging.  I have ported the drawing into my solid design program, Rhino3D, and have both solid models and an updated Autocad drawing.  This morning, I wrote a text file to program the tool paths for the CNC, and fed it into Mach.  An hour or so of babysitting the mill later, the fire control pocket was smoothed out.  I did the more complex end (on the right here) by hand, using immediate control of the mill.

The drilling was not as trouble free as I'd like to think.  There are marks on the side of fire control pocket from where some drill bits drifted.  I don't believe these will affect performance.  For the non-machinists who read this, no machinist ever considers a hole drilled with a standard drill bit to be a high-precision thing.  They're a rough cut.  The typical result of a drill is neither round, nor straight, nor the right dimension.  I have to assume the folks who put this kit together knew that and put the drill holes where things like this don't matter.

Here's a shot while I was still working on the lower; you can see the marks from the drill bits on the top of the pocket.  Also, the 5/16" holes that form the trigger slot ended up with one off the centerline, although they both started out on it. 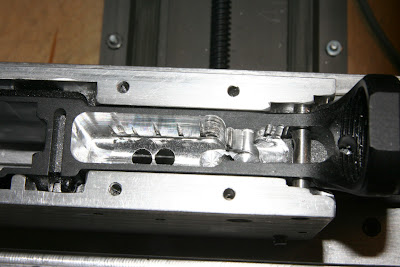 My goal is for this to be a rifle next weekend.  I have all the parts.

As always, for more info, email me or comment here.