Today, I'm three years old.  Well, the first post was actually on February 21, not the 24th, but that was a Sunday, and I've come to think of the closest Sunday as the anniversary date. 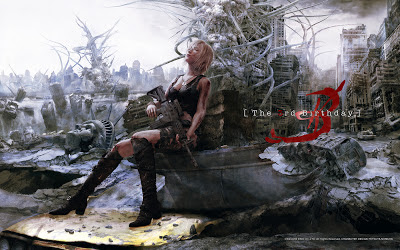 I never knew there was PSP game called The Third Birthday, so thanks to them for great third anniversary image complete with enough apocalyptic imagery to fit in perfectly here.  Now if the girl was Ben Bernanke, that would be perfect.

I think I need brain bleach for that thought.

As I've said before my overall approach to this blog reflects something I've said before: bad times are coming.  Survival is for cockroaches; let's thrive.  Someone has to know how to make things.

I try to post something every day.  Borepatch, Tam, Bayou Renaissance Man; you guys have my admiration.  I'll be first to admit it can be difficult and sometimes there just isn't anything there.  Every now and then my muse goes and does her hair or something.  This year I aim to post worthwhile reading, even if it isn't every day.  Most of the folks who put up several posts everyday tend to put up shorter things than I seem to be capable of writing.

As I tend to say every year, I have no idea how long I'll be here, but here's to the ride!