Two Words for a Lazy Saturday

Two words for a lazy Saturday, over a thousand miles away from the Great Blizzard Nemo or Snowpocalpyse or whatever you call it.  Dry.  Fire.

It's no secret that good dry fire practice helps make you a better shooter.  If you live in an area of wide open spaces and can go out to shoot anytime you want (and your ammo stock pile is really deep), maybe you don't think of dry firing often.  For those of us in the "cit-tay" where we need to go to ranges, and even then can do nothing but shoot square range, a dry fire program has some training benefits.  Dry firing is recommended by everyone from the Appleseed Project to trainers/tactical ninjas like Rob Pincus at I.C.E..

At the Appleseed Event we went to, they recommended marking a dot on the wall that we could put our rifle sights on and dry fire.  Another approach is something like the Laserlyte Training System.  The system consists of the target and caliber-specific laser cartridges that fit in the bore of your gun.  The target is a combination of LEDs and photo sensors.  You fire the laser at it and the photo sensors record where the laser hits. Later, by putting the laser on the sensor at lower left, it turns on an LED at every place you hit.

In this video, Rob demonstrates and explains an important part of the training.  You don't want to train yourself to not expect the BANG.  When you pull the trigger and don't get the BANG, program yourself to do the Tap-Rack-Bang drill.  If your EDC is the type of gun that doesn't require racking the slide to reset the trigger, like a revolver and some semiautomatics, it may not be a concern, but if you're using most Glocks or XDs or other polymer guns, program your brain to do that drill without thinking.  That way, if you ever don't hear that BANG in real life, when you really need to, you do the drill automatically. 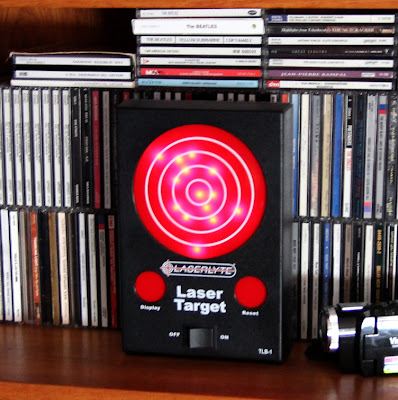 As you can see, sometimes I put the trainer on a shelf and do various things I can never do on the square range.  These were shot from about twice arms length, shooting from a draw to just off my right hip, gun rolled over to about 45 degrees off vertical; in other words completely un-aimed.   An advantage of the system is that I can practice drawing and firing while moving around the room, something I just can't do at any of my local ranges.  I could get more aggressive with it, put in a tree or somewhere out in the backyard and make it a physical workout, which is actually a pretty neat idea, now that I think of it.  This is far more dynamic than putting a pencil dot on the wall and lining it up in sights for plain dry fire, but if you live in the boonies and can actually set up targets and do this with real, live, ammo, then you don't need one.

The disadvantage, of course, is the cost.  The trainer MSRP is $231, but you can get those for much less.  Midway has them for $140 today (but out of stock...).  For any one caliber, the cartridges retail about $80, from a much higher MSRP.   If you plan to train with a lot of different calibers, it can get pricey, but you can get set for one caliber for $220-ish.  You could buy a lot of ammo for that, if you could buy ammo.  On the other hand, it's not expensive compared to most training classes.

Think about it.  It's a good tool.

Edit Sunday 1225P:  Added a missing word.  This sentence was wrong:  "You could buy a lot of ammo for that, if you could buy ammo." didn't have the second "could".

Posted by SiGraybeard at 5:36 PM