The big news this morning was that we had spectacular round of Whack-a-Mole in Chelyabinsk, Russia.  As I said in that linked piece, from 2010,


Remember the arcade game?  Moles pop up in a field of holes and you club them down with a mallet? 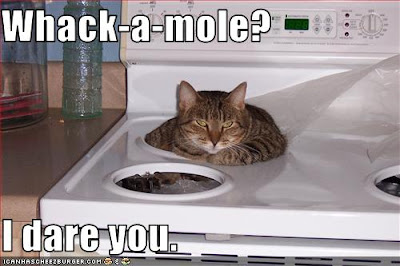 Unfortunately, our planet is engaged in cosmic game of whack-a-mole.  How bad is it?  I've undertaken realistic scientific simulations using a common sledge hammer and a hamster and I have to say it's not pretty.  In fact, it's so "not pretty" that decorum prevents me from posting pictures of it.

It didn't take long for authorities to say they believe they found the impact point of a big surviving chunk, as it punched a pretty nice hole in the ice of Chebarkul Lake 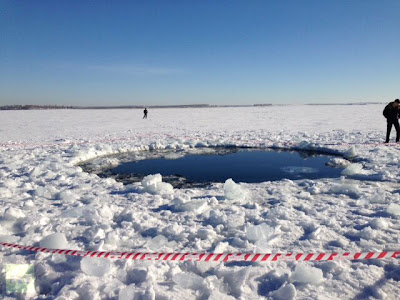 Army units found three meteorite debris impact sites, two of which are in an area near Chebarkul Lake, west of Chelyabinsk. The third site was found some 80 kilometers further to the northwest, near the town of Zlatoust. One of the fragments that struck near Chebarkul left a crater six meters in diameter.

There are some cool videos that give a good look at the fireball so you can see how bright it was, like this one.  and a longer video that shows a street scene so you can see how many windows and doors were blown out by the explosion.  A real shaky-cam with lots of excited commentary in Russian (I assume).

Of course, this meteor was not related to the much publicized asteroid 2012 DA14 which passed by uneventfully as predicted.

That's the thing about the Great Cosmic Whack-A-Mole game: not every piece that can cause some damage is known about.  Most of these unknown, untracked hunks, like this one, could knock over buildings or pretty thoroughly mess up a city.  It's a game.  You're in it.  No, you were not asked to join. It's part of the risks that come with life.  The next one could come in a second or not for 100 years.  It could land in the Pacific (most likely - it covers the most area of the globe), or it could land in your backyard.