I wasn't aware until today that 75 W light bulbs were outlawed on January 1st, following 100 W bulbs into the dustbins of history. Lou Frenzel writes in Electronic Design:


As of the first of the year, the manufacture and sale of 75-watt incandescents is against the law.  That ban happened to 100-watt bulbs last year.  Next year, 60 and 40-watt bulbs go on the no-no list.  All of that is due to the controversial Energy Independence and Security Act (ESIA) of 2007.  The Act does not ban the actual use or purchase of these bulbs, just their manufacture and sale.

Outlawing purchase takes care of itself because all stock will eventually get sold.  And since these bulbs burn out, the "actual use" part takes care of itself without the Feds having to get up close and personal.  Similar to the ban of T12 fluorescent bulbs I wrote about last June, and the 100 W bulbs mentioned in that quote, it's all the result of our insect overlords deciding we aren't smart enough to choose our lighting needs on our own.

Consider it a nudge.  We may not have an officially recognized "Nudge Unit" like they do in the UK, but it all comes down to that book by Cass Sunstein many of us have written about many times before.

Like most people, I've had a few CFL bulbs here, and I've had pretty uniformly bad results with them.  First off, not one has lasted as long as claimed (a topic of serious discussion in engineering forums), second off, there's that problem with mercury contamination when they die, and finally, I don't like the light color - even the ones claimed to be daylight bulbs.  In one fixture (ceiling in my garage) they last no longer than incandescent bulbs and cost several times more.

At the moment, I'm writing under the light of four LED bulbs.  Those were on sale at four for $60 (instead of the usual $80) and each puts out the same number of lumens as a typical 60W incandescent.  I've only had them in since October, but this fixture is one of the most used in the house, and might be on as much as 8 hours a day.  I'd like to go to more LEDs around the house, but they're still pretty high on the cost curve, and there are very few equivalents to the 100W bulbs I like in many places.  Maybe my stockpiled 100W and 60W bulbs will last long enough for a couple of price drops.

Frenzel points out a reality that many greenies miss, but misses another himself:


I think the big question for the home owner is: Am I really saving money?  Probably not.  According to the U.S. Energy Information Administration and the Department of Energy, residential lighting represents only 9 to 13% of total electrical power usage.  Most electrical energy goes to refrigerators, air conditioning, water heaters, and other appliances.  So if you replace all your bulbs with CFLs or LEDs you are only saving a fraction of your total electrical bill.

While he's right about the lighting representing a small portion of electricity use, in places with a real winter, incandescent bulbs make a real contribution to heating the living space.  Energy efficient bulbs may save electricity in the fixture, but make you spend it on your heating.  As always, solutions that only look at one small part are usually not solutions and make the problems worse.  They always act as if the law of unintended consequences doesn't apply to them. 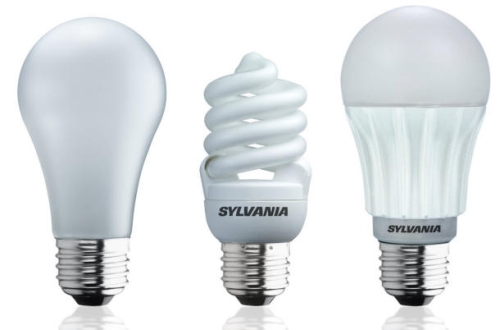 Banning light bulbs without a good replacement is just another example of big government overreach.  Like declaring it's time for solar power, legislators think they can mandate changes to inescapable laws of nature.  Solar power will have its day, and LED bulbs will have their day, but neither of those days is today.  CFLs might have already been as good as they're ever going to be.