Careening From Crisis To Crisis 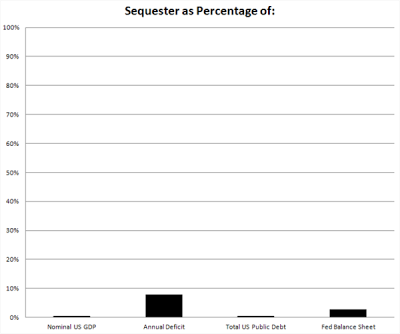 And you can't pass a budget and act like reasonable adults if you're trying to keep the country in a constant state of crisis.  After all, you don't ever want to let a good crisis go to waste.  Instead, you line up a bunch first responders (or actors paid to dress like them) and prattle on about firemen not be paid, police not being paid, teachers not being paid - all the while knowing the people watching won't think "wait a minute, those people don't get paid by Washington".  It's the same whenever any government body gets funding cut: go to scare tactics and line up police and firemen.  They never suggest cutting stupid waste - they try to scare taxpayers.  We can't cut the algae to diesel fuel energy program?  The turtle tunnels under roads?  Does the Mandatory Airport Art get funded by them?  That's an easy cut.  How about the corn for ethanol idiocy, excuse me, subsidy, which seems to exist only because Iowa has the first presidential caucus?

The CBO says the sequester will amount to $44 billion in cuts this year.  The last time we had a budget, it was about $4.4 Trillion, $4400 Billion, with 2.2B of that revenue, and the rest from deficit spending (mostly made up out of thin air).  That makes this "world-ending" cut about 2% of revenue.  $4400 billion dollars over 365 days is just over $12 billion per day, and the sequester costs less than 4 days spending.  Even if CBO is wrong (they often are) and the full $85 billion is cut this year, that basically only doubles those numbers above.  Instead of cutting 4 days of spending, they cut 8 days of spending out of 365.  BFD!

Look, if we can't handle that small a cut, when we need to cut about 50%, we may as well just dig the grave and cover the country over now.  We're never getting out of this mess.  The presidents assertion that we fix this by "closing loopholes" is laughable - or it would be if idiots didn't pass that on as some sort of Gospel Revelation.  You could confiscate every penny - tax 100% of the income of "the rich" and not fix this mess.  The president's claim is class warfare demagoguery.

And the next crisis is that we run out of money on March 27, again.  All because Harry Reid is afraid to pass a budget that might make him lose plausible deniability.  Allow us to see just what they are really spending - how much and on what.  They want it this way.