He got me thinking about our political fights more in the sense of a street fight or gun fight. He really has a good point: if we sit here and just write or call our legislators over and over, the absolute best we can hope for is not lose any more rights. We will never get any more rights.

I've written on this topic before and part of this will come from two posts: here and here, along with some new thoughts.

Let's start here: any adult with normal rights can walk into a sporting goods store in most places and walk out with a shotgun or a rifle with no waiting period. But if they wanted to buy an AR-15 or a Mossberg 500 from the factory or a store in another city, why does it have to go through a local FFL's hands? Why can't anyone order a rifle or shotgun from an online gun store, or even an Amazon.com kind of "online superstore" and have it shipped to their house?  It was sold by an FFL that did the NICS check, so why does another one have to get involved?  It used to be that way, until the GCA of '68.  What advantage is there to society from shipping it to an FFL?  It's not like the second FFL prevents someone from stealing it in transit - that's on the shipping company.  It does nothing but give money to local FFL holders. All they can do is look at the buyer's ID - which can be done digitally with encryption when the purchase is made.

This is the opposite of the current drive to make every sale of every used firearm go through an FFL.  I think the whole FFL system is obsolete, a remnant of the way things worked in the 1930s, and does nothing that couldn't be achieved a dozen other ways.  All it does is keep FFLs and BATFE paper wonks employed.  I want our side to push back on the whole system.

We should push for, at the Federal level, complete concealed carry reciprocity across the country.  Illinois needs to be dragged, kicking and screaming into the modern age.

There's also a silly hodgepodge of waiting periods for a handgun.  In some places it's 3 days, in others, 5 days.  Most places in Florida will waive the wait if you hold a concealed carry permit.  If there's a waiting period, why can't you order a pistol from Bud's (for example) and wait 3 or 4 days for UPS to deliver it? Again, an FFL is shipping it, why does it need to go to another one?  With today's computer security, you could verify age, do a NICS check - anything the local shop can do - online. The whole idea of that 3 day wait was a "cooling off" period, so a hothead doesn't go buy a gun in a moment of anger and then go kill someone, but I personally have a hard time believing there were large numbers of that sort of crime anyway.  It's an extension of the ban on Saturday Night Specials, which (as far as I can tell) only had the effect of removing cheap, reasonably functional guns from people who couldn't afford better ones, and caused some smaller arms companies to either fold or change their product line.  Another penalty on the poor.  But, fine, we'll play your infantile waiting game -- now how does waiting 3 days to pick up a gun in your city differ from waiting 3 days to get it delivered by UPS or FedEx?

Why are silencers - glorified mufflers - regulated as if they were machine guns?  Why are we required to have a muffler on a car, motorcycle or lawn mower, but we're required to not have one on a gun?  I'll tell you why: Hollywood.  They created this illusion that a silencer reduces the 155 to 160 dB of a gun shot down to a barely audible, and it just isn't so.  Silencers should be completely deregulated - not even the $5 "any other weapon" class - over the counter at your local store.  This one actually is for the children.  And for anyone who moves next door to gun ranges or clubs and gets disturbed by the sounds.

We should eliminate postal restrictions against mailing of firearms. We can ship them via UPS, or FedEx, why not USPS?  Don't they need every penny of revenue they can get?

Get rid of the stupid “sporting purpose” tests for firearms. The Heller decision makes it very clear that the Second Amendment isn’t about duck hunting. This particularly affects imports. Unless it as part of some trade war it makes no sense that guns and ammo which are perfectly legal to manufacture and own inside the U.S. can't be imported.  Not that trade wars make much sense, either.

Get rid of the stupid laws against on short barreled rifles and shotguns. This only made sense when there were plans to ban handguns (originally part of NFA 34). The idea that a shotgun barrel 18.05" long is fine, but one that's 17.95" is some sort of killer monster weapon is just silly.  It's there simply to create law violations.  It's also one of their most enforced laws - probably because it's really easy to measure barrel length. 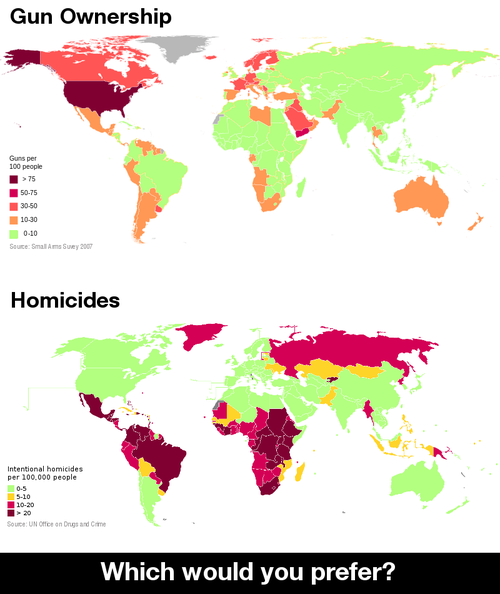 (found at 90 Miles From Tyranny)