But have you heard of "onshoring" or "reshoring":  bringing manufacturing jobs back to the US?  I first read reports about this a few years ago. When companies first started moving tech jobs over to India and China, there was a much bigger gap in pay between the US and those countries.  As supply and demand has worked, there simply are not enough people in the world who can do those jobs, pay increases over there have massively outstripped raises here in the states and the economics is becoming less attractive for many reasons.

Design News has an article on the subject.


China’s low labor costs once compelled companies to outsource production abroad. Today, wages are five times higher than they were 12 years ago, and are estimated to continue rising at 18 percent a year...

The Atlantic Monthly covers the subject, too.


The heart of their argument is this: Through most of post–World War II history, the forces of globalization have made it harder and harder to keep manufacturing jobs in the United States. But the latest wave of technological innovation, communications systems, and production tools may now make it easier—especially to bring new products to market faster than the competition by designing, refining, and making them in the United States. At just the same time, social and economic changes in China are making the outsourcing business ever costlier and trickier for all but the most experienced firms.  (emphasis added - SiG)

Strangely, it was just over a year ago that I wrote on this same topic, linking to an article in ... the Atlantic Monthly. They said in that piece:


We do still make things here, even though many people don’t believe me when I tell them that. Depending on which stats you believe, the United States is either the No. 1 or No. 2 manufacturer in the world (China may have surpassed us in the past year or two). Whatever the country’s current rank, its manufacturing output continues to grow strongly; in the past decade alone, output from American factories, adjusted for inflation, has risen by a third.

Finally, as I said in last January's piece, I've worked in electronics manufacturing since 1976, virtually my entire adult life; first as an electronics technician, and eventually as an engineer.  If there's one constant, it's the refinement of processes to run more automatically and require fewer but higher-level people.  I suppose the other constant since '76 has been people telling me we don't manufacture anything in America anymore.

There's a big political pie here, and His Royal Oneness is droning on in the background about manufacturing now.  I would bet his mental image of manufacturing is unionized workers of all kinds - the better for that conveyor belt of money that unions and government exchange.  Profitability for that kind of job is not very likely at all. 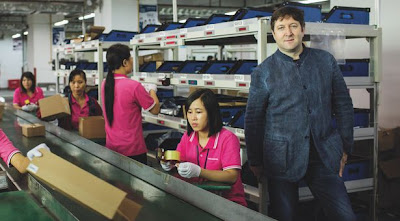 (Atlantic author James Fallows at an electronics manufacturer in China).