It's really, really a shame that the state has to introduce laws to try to inject some sense into school systems, but House Bill 7029 was introduced into the Florida House to keep teachers and administrators for suspending little kids who make their fingers look gun shaped, or nibble a pop tart into something that looks remotely like a gun.  It successfully passed out of committee this week. 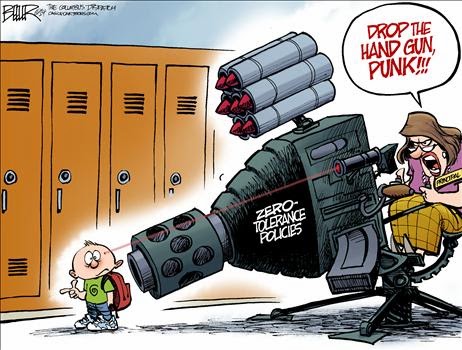 The school droids say that the zero tolerance laws leave them no choice.  I say if you really think a pop tart or a finger is a dangerous weapon, or if you think a 2nd amendment shirt is somehow dangerous, you need a rubber room and some serious medication.  This should never have gotten to the point where laws are needed.

That said, there is an alternative view that this stupidity isn't a bug, it's a feature.  It's yet another sign of the leftist elite take over of the institution; make guns seem so terrible, so socially unacceptable that kids will be scared to death of them.  Isn't that the gist of what Eric Holder said?  Like the 5 year old who was questioned so long and so hard about a cap gun that he wet his pants.  You have to wonder if that kid could ever not be terrified of guns.   So it seems we need the laws to reign in the idiots doing this.