Lying For The Image

Not that it's a new thing but it just gets under my skin.  See, I was brought up not to lie, and so the concept that one would lie for some "greater good" just doesn't fit in my brain.  If the truth isn't persuasive enough, it's not on your side.  With the possible exception being something like telling the guy holding the gun on you that you swear you won't call the cops after he leaves.  The image that ticked me off?  This one from the Supreme Court this week: 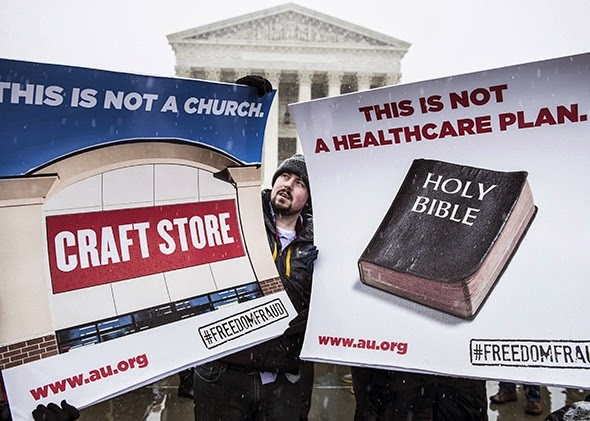 If you know anything about this case, you know it has essentially nothing do with either of these signs or what's being presented in any news source, be it CNN or Fox.  It's about whether a company has to provide abortifacients in compliance with Federal law, not contraceptives; the deeper question is do people who form a company give up their human right to live in compliance with their faith or even their preferences.  Hobby Lobby already provides contraceptives (16 out of 20 required), their issue is with the 20% which function by preventing survival of an embryo - an abortifacient.   Neither one of those signs represents that case at all.  The one on the left is a dangerous assault on all religions everywhere.  The one on the right, while technically a true statement, is 100% irrelevant.  It's not a healthcare plan.  It's also not a refrigerator, it's not a banana, and perhaps most relevant: it's not a government office.

The one on the left is more dangerous because it uses freedom of worship (FoW) to replace freedom of religion (FoR).  The president has increasingly been using the phrase FoW instead of FoR since his Cairo speech in '09; some say to the exclusion of FoR.  At least one organization, the U.S. Commission on International Religious Freedom also noted the shift and raised a flag on it in its 2010 annual report.  Freedom of worship is just that; it says the only place you are allowed your religious views is in a recognized church - and if congress trying to decide who gets freedom of speech is any indication, laws defining an allowable church ought to start hitting the congress in ...oh...15 minutes or so.  You can believe anything you want in your recognized building, but the moment you walk out of it, you may only believe what Your God Your Government tells you.  Even Muslim nations under Sharia law trumpet their Freedom of Worship, where (at best) it means other religions may be taught only in churches.  More often, it simply means the choice between the Mosque and the cemetery;  you're free to be a Muslim or die (or get out of the country).

Freedom of Religion is what is expressed in the constitution, and has allowed for the ‘free exercise of religion’ in all aspects of American society unabated for over 200 years.  Only those very uninvolved in watching society would say that there is no conflict over this in American society; just last week, Cardinal Raymond Burke, the Vatican's Chief Justice noted that US policies  “have become progressively more hostile toward Christian civilization.”  In his interview, he specifically said he thought Obama was shifting America to a Freedom of Worship society.

I think it's wise to never dismiss politics when watching any politicians doing anything, and that's especially true with the crop of Alinskyites in power.  Why does this case get to the Supreme court?  If the government wanted to absolutely ensure those abortifacients were available, they have many ways to do it, including direct confiscation of your taxes and mine.  So it can't simply be about that.  What's it all about?  One of two things: to get yet another area of the constitution shredded away - even better! by the court not the president's phone and pen; the other possibility is to further try to break Obamacare down so that the morons cry out for single payer government takeover of everything.  Which is virtually total control over every citizen.  If you're the one in control, and a pathological control freak, what's not to like about total control over everything?

Posted by SiGraybeard at 3:24 PM