Is The Physics Community Waking Up?

The American Physical Society, an association of 50,000 American physicists in industry and academia, has long just mouthed the government party line that global warmening climate chaos anthropogenic climate change is supported by the science.  I can't recall the first time I read one of the papers they'd issued and shook my head, wondering what happened to the academic rigor and clear-thinking that physicists were always known for; I just recall it was long ago.  It was an embarrassment.  I wrote about it to some extent in this piece from two years ago:


When the APS simply published a long letter from Lord Monckton, a well known skeptic about AGW, they went so far as to publish a disclaimer that this was not the APS viewpoint - something they have never done about really "out there" quantum physics.   (It's at the top of article in that link) As Dr. Giaever says; it's acceptable to talk about the Copenhagen interpretation of quantum theory, which implies that for every decision we make, a parallel universe pops into existence, but it's not acceptable to question computer models about future climates that claim accuracy to even one decimal place?

Things look like they might just be changing.  The self-correcting tendencies of real science appear to be emerging.  Thanks to a link from Sense of Events, I found this article from an Australian journal called Quadrant: Finally, Some Real Climate Science.  It opens by saying the APS rules require them to recheck these sorts of support every five years, to make sure they're keeping up with science.  In a bold and completely honest move, they staffed the committee doing the review with three very well regarded "climate skeptics", Richard Lindzen of MIT, Judith Curry of Georgia Tech and John Christy of UAH (Alabama Huntsville).  The other three are prominent members of the IPCC establishment: IPCC lead author and modeler William Collins, atmospheric physicist Isaac Held, and Ben Santer.  The Quadrant article lists some of the questions that they are asking.  This is a real breath of fresh air; real science is trying to emerge here.  As always, I'll include some samples and say you should go read:


While the Global Mean Surface Temperature (GMST) rose strongly from 1980-98, it has shown no significant rise for the past 15 years…[The APS notes that neither the 4th nor 5th IPCC report modeling suggested any stasis would occur, and then asks] …

To what would you attribute the stasis?

If non-anthropogenic influences are strong enough to counteract the expected effects of increased CO2, why wouldn’t they be strong enough to sometimes enhance warming trends, and in so doing lead to an over-estimate of CO2 influence?

What are the implications of this stasis for confidence in the models and their projections?

Out of the gate, they start at one of the major holes in the situation, indeed, the whole crux of the argument: the agreement between the models and reality is abysmal.

Are deep ocean observations sufficient in coverage and precision to bear on this hypothesis quantitatively?

Why would the heat sequestration have ‘turned on’ at the turn of this century?

What could make it ‘turn off’ and when might that occur?

This is just pure beauty from where I sit.  Over and over, the APS panel asks "You say xyz is going on.  How do you know?  What are your measurement uncertainties? Don't just tell me it's something else, show me the data or calculations that back that up!

Maybe I'm a victim of premature congratulations, but this is sounding more like physicists than anything I've heard out of the APS in at least a decade.  We obviously don't know what they'll conclude, but they seem to be asking the right questions, and if you don't ask the right questions, you'll never get the right answers. 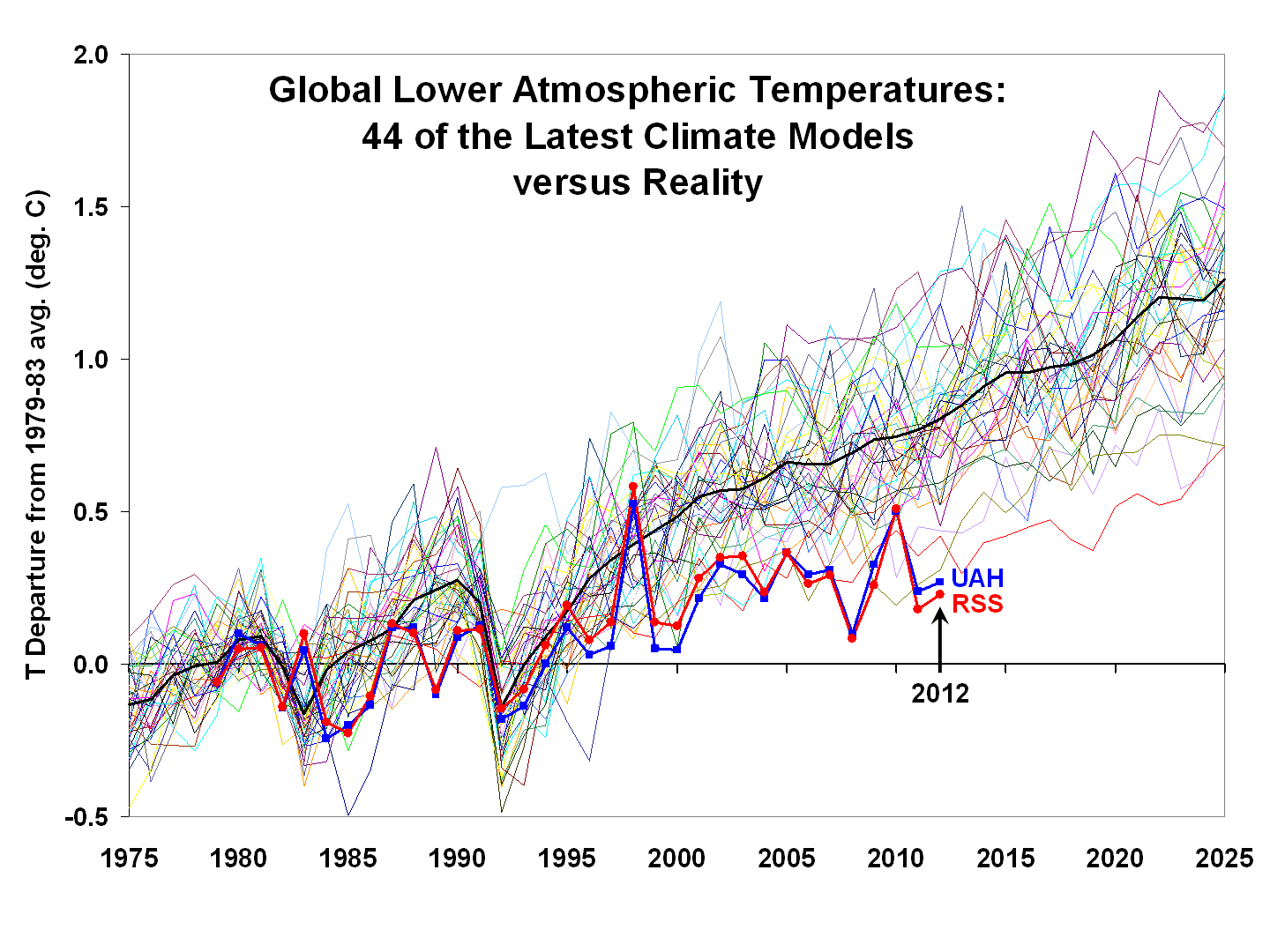 You may have seen this graph at Borepatch's: the gold standard data is the two satellite data sets, UAH and RSS.  Since 1995, the models the IPCC uses have diverged more and more from the measured data.  The real world is cooler than all of the models.  The dark line appears to be the model average.