(yeah, I know.  I don't do enough controversial topics around here)

A friend I used to work with sent me a link to this TED Talk on NPR: Has Money Taken Over American Politics?  Like many of you, and some of the commenters, I thought "when has money not been in control?"  I can rattle off quotes all day, and I bet you know them, too.  Everyone knows it's a problem.  But if I had a problem to go after this wouldn't be number one.  Maybe not even number two.

The guy who gives the talk has a program he's trying to get people to join in on.  It's not a bad talk, in typical TED style, but I think he's focusing in the wrong direction.  Contributors pay big bucks to buy government offices for a simple reason: it's an easy way to make money.  The day that buying an official to pass laws or make rules that hurt your competitor became a more cost effective than improving your company was the day we started sliding down the slippery slope to where we are.

I've said before that I don't think money is as important as the general wisdom says.  I think the reasons everyone tries to raise bundles of many are mostly self-deception.  First off, it's easy to quantify.  The campaign manager can say, "look at how much I collected for you!".  Second, if the campaign loses, it's easier for a campaign manager to say "they spent more than we did" than to say "our advisers sucked", and way easier than saying "my campaign work sucked", or "face it - you suck".  Last week, a nobody with no experience in elected office beat Alex Sink in a House race over in Tampa area.  Sink was the evil party's candidate for governor last time - she just barely lost.  Sink and the various Democratic groups outspent the stupid party candidate by 3:1 and still lost.    In Texas, the same basic story was Ted Cruz in 2012 - Cruz was outspent 3:1 in his primary campaign.  Money is not everything.

The number one problem on my list is that our system has devolved into a ruling class vs. the general population, and that's largely because the government is too big.  It's a permanent ruling class because once someone is elected, they stand a better than 80% chance of never being voted out.  They don't have to answer to voters or constituents, so they treat us like crap.  The only thing they're afraid of is having the big money run someone else against them in the primaries.  Obviously lobbyist money affects that, but it's crony politics all the way down.  While I like the idea of term limits, they're not without drawbacks.  Once a politico is in their last term they don't even have a reason to pretend they're not in it only for themselves.

When I think about it, it seems people have been talking about campaign finance reform for as as far back as I can recall and a law was passed in the 1970s, as well as more recently.  Really worked well, hasn't it?  We already have restrictions on spending, and they get around that with all these non-candidate groups.  "This message was paid for by Americans Loving Fuzzy Kittens".  Besides, why isn't telling someone they can't spend money to put a message on air a violation of their 1st Amendment free speech protections?  Yeah, I know.  Because the Supremes said so. 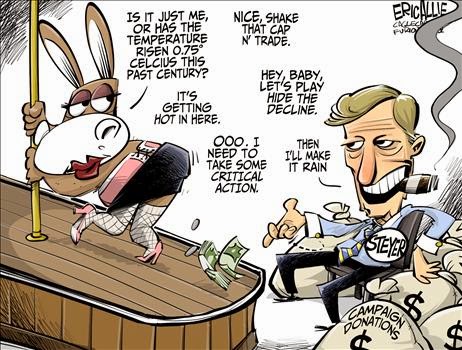