I've been watching the story about Ares Armor and the run-in they've had with the BATFE with a lot of interest.  Only the newest of the newcomers to the blog don't know that I built an AR from an 80% lower a couple of years ago, and have featured it here ever since.  My AR is built on an aluminum 80% from Colfax Tactical, while the BATFE has their panties in a wad over the polymer lowers Ares is selling, lowers made by EP Armory.  Not coincidentally, I've written about those here, too.

So what's my take on what's going on?  Putting together what I've read, like in the Shooting Wire, and other reports, like Michael Bane's podcast on the topic, it appears to be a convergence of a vehemently anti-gun administration, a criminal investigation in which the BATFE is accusing a couple of illegal immigrants (brothers Luiz and Emiliano Cortez-Garcia) of buying 80% lowers and manufacturing complete guns out of them.  The brothers are alleged to have sold these completed guns to felons who couldn't legally buy a gun.  While the federal law is pretty clear that we can build guns for ourselves, this is clearly running a factory in violation of lots of laws; that is, if the BATFE is telling the truth, and I have no particular reason to believe they are.  But if the brothers were using these 80% lowers it makes sense they'd sweep up the companies involved.  The fact that BATFE wanted (and seized) Ares' customer lists makes more sense, too.

It then seems that once they were on Ares' scent, the reasons BATFE put forth for charges against them is that the polymer lower they sell must (BATFE declaration) be made it two pieces: one is the black plastic portion which is made as a finished lower receiver, and then filled in with the color contrasting plastic.  During that interval the black plastic part is a gun, and Ares Armor must be an FFL, get an FFL manufacturing license, treat the lowers as guns and they can't be unmade into "not guns".  Ares and EP maintain, and claim to have manufacturing process documents that back up the claim that the lower is actually made in a way that a complete lower is never present. 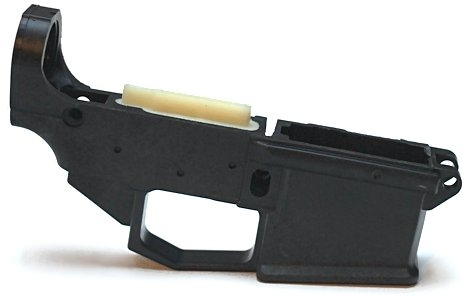 As an aside, the absolute coolest trick in the world, and I've never heard anyone else ever talk about doing it, would be to mold this out of two grades of plastic.  Wouldn't it just be the coolest thing you've ever seen if the dark part of this lower melted at say, 400 degrees, and the light part melted at 200?  So that all you'd have to do to turn this 80% lower into a finished one would be to immerse it in boiling water?  The trick would be to make it in a way that it would not be a complete lower until that moment and I frankly don't see how it could ever happen.  But I can just imagine the Moms Demanding Your Rights, the BATFE, Mayor McFascist and the Illegal Mayors (sounds like a bad band name) along with a buttload of others dissolving in apoplexy over that!

To me, the bottom line is that the BATFE might succeed in court against Ares and EP, but they will be unable to stop the 80% lower market as much as they hate it and want to shut it down.  They might desperately want to keep people from being able to build guns, but they're bucking one of the most powerful trends in society.  This is convergence, the new industrial revolution.  With the advance of personal fabrication - the intersection of home CNC, 3D printing, continually more powerful digital electronics, what's called the Maker movement, it is literally getting to the point where you will be able to buy anything you need to make any gun you want. Dimensioned drawings for the AR family lowers are online; it doesn't take much to turn those into tool paths.  The open source movement will provide that.  To use the cliche' again, "you can't stop the signal".