We were in the cleanup and aftermath of Hurricane Jeanne, the second of the two hurricanes to hit us directly in 2004.  Charley, which was a small but intense Cat 5 storm when it came ashore in Charlotte Harbor, brushed us in late August but only at tropical storm strength.  The storm came ashore almost exactly where Hurricane Frances came ashore on September 5th, they came ashore within roughly 8 miles of each other, between the cities of Ft. Pierce and Stuart on the SE coast of Florida.

Jeanne had one of those peculiar paths hurricanes sometimes get, going north of the Bahamas, well offshore from here, but then doing a loop and coming back to hit us.  From our standpoint it was convenient, if not a little spooky.  After the clean up from Frances and life getting back to normal (traffic lights actually working), we took off for a week's vacation in the upper peninsula of Michigan to look for samples of the native copper it's famous for up there.  As I recall, we flew back into town on Wednesday and the storm hit on Saturday night (it came ashore Sunday morning).  It's as if it waited for us to come back. 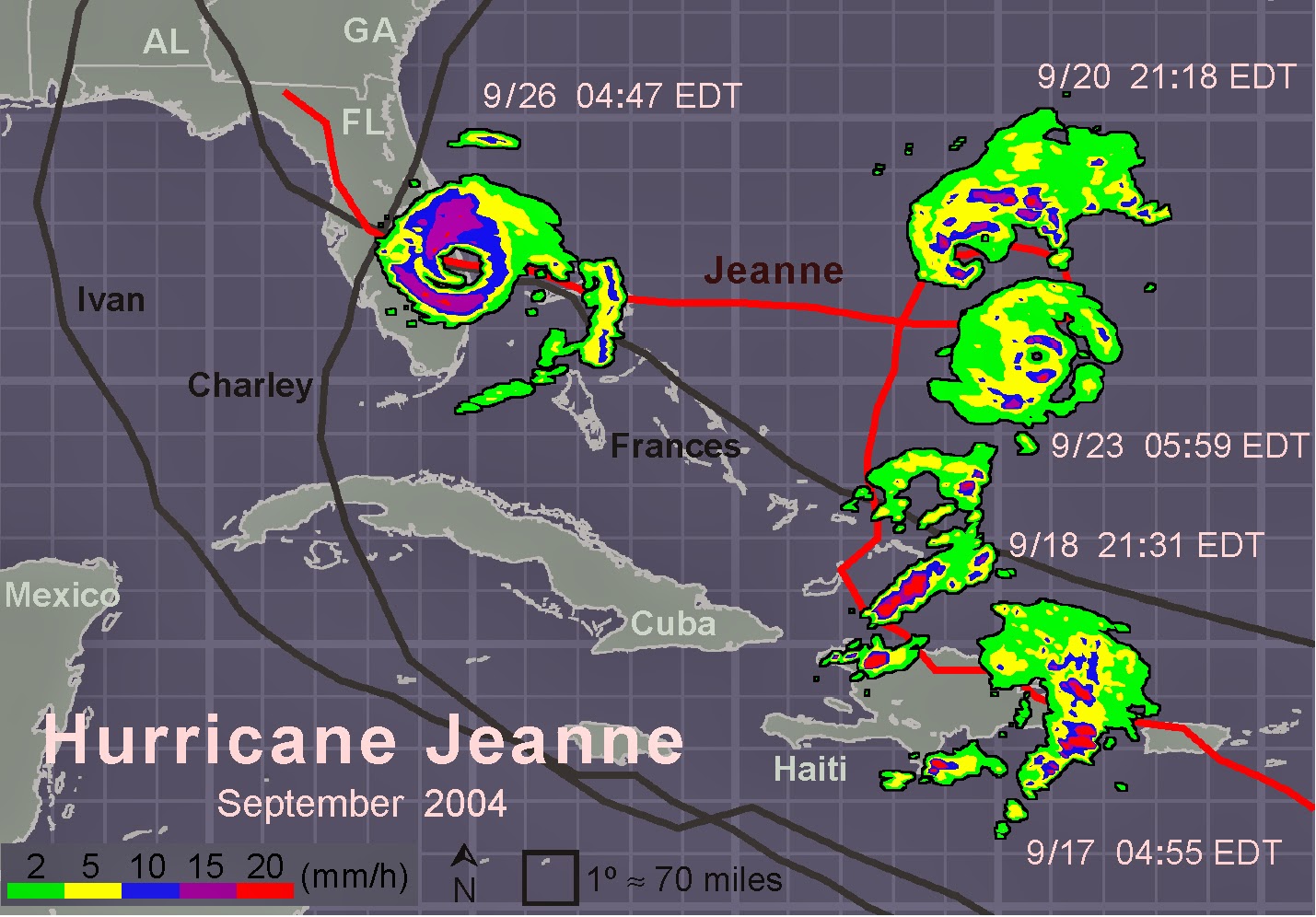 Like Frances, our power stayed on until the eye was well past and the winds shifted from easterly to more southerly.  Unlike Frances, we'd bought a few battery backup power supplies for the critical stuff, so I could watch some goofy movie on the Sci-Fi channel and as the lights flickered, I could still watch the movie.  After Frances our power was out from just before daybreak until 9 that night - about 15 or 16 hours.  After Jeanne it stayed out about 36 hours.  Both of those times are exceptionally short, for reasons I've never understood.  Many friends were without power for weeks after Frances only to lose it again for weeks after Jeanne.

More hurricanes would hit elsewhere in Florida that year, but Wilma late in the season of 2005, was the last before the current 9 year gap (and counting) without a hurricane making landfall in Florida.  Wilma removed the new roof my brother put on his south Palm Beach County home after Frances and Jeanne, but Wilma is only notable to me because it was late October and the cold front pushing it northeast and over the state actually got me cold while I was outside cleaning up.  It was the only time in my life I've gotten cold cleaning up after a hurricane or tropical storm!

It is beginning to look like the era of 'high spin cycle' tropical cyclone activity in the Atlantic basin that started in 1995 has run its course with only five named storms recorded through today (and none expected through the end of September). There were hints of that demise last year with a below normal level of hurricane development, i.e., only two Cat I storms - the last time that the Atlantic only had two hurricanes in a season was 1982. The last time that a season had three or less named storms by August 31st was in 1994 - the last year of the previous 'quiet cycle' in the Atlantic.

Since the lack of activity cannot be blamed on an El Nino event (it has not yet started), it is increasingly likely that the period of Atlantic high tropical cyclone activity has ended. However, it is important to remember that the likelihood of a U.S. hurricane landfall is about the same (approximately 22%) during a 'quiet cycle' era as it is during an 'active cycle' era - and that is also true for a Florida hurricane landfall (about 5%).

Posted by SiGraybeard at 8:01 PM