To CNC or Not To CNC

The topic of CNC control of the mill I wrote about yesterday came up in the comments.  Am I going to CNC?  Buy it that way or do it myself? I thought I'd pass along my thoughts in a post because it will likely be more useful for other readers.  Actually, I think the best answer to "CNC or Manual Mill" is "Yes!".  I'd like both options.

A brief detour to a story of how I got where I am in my machine tool obsession hobby.  I was one of those guys who kept saying "one of these days" I wanted to get a lathe and into metal working.  Mrs. Graybeard took me up on that about 10 years ago and gifted me my Sherline 4400 micro lathe for Christmas.  I had never actually touched any machine tools at all at that point, so to say I didn't know jack is an understatement.  After playing with that lathe for 6 months, learning how to make some chips, and reading the Yahoo Sherline group regularly, an ad appeared for a CNC Sherline mill surplussed from a school system across the state in Tampa.  After a 350 mile round trip drive, I pulled a CNC Sherline mill into my garage.  The only problem was that nothing about it worked, except that the spindle motor turned.  Like my lathe on its first day, this was the first time I had ever touched a milling machine.

The next several months were spent learning how CNC worked.  I found a program that I could control the mill with (TurboCNC), a junky laptop to run that SW on, and quickly found that my CNC controller didn't work at all on one of three axes.  It only worked poorly on another one.  After some research, I bought a new controller very similar to one of these from Xylotex.  It was running.

As the years went by, I expanded its capability.  I added a fourth axis (rotary) and then upgraded the basic machine with the A2ZCNC extended X/Y axes and a longer Sherline Z axis.  Motors were upgraded in torque substantially, from 75 in-oz to almost 400.  The current mill looks like this: 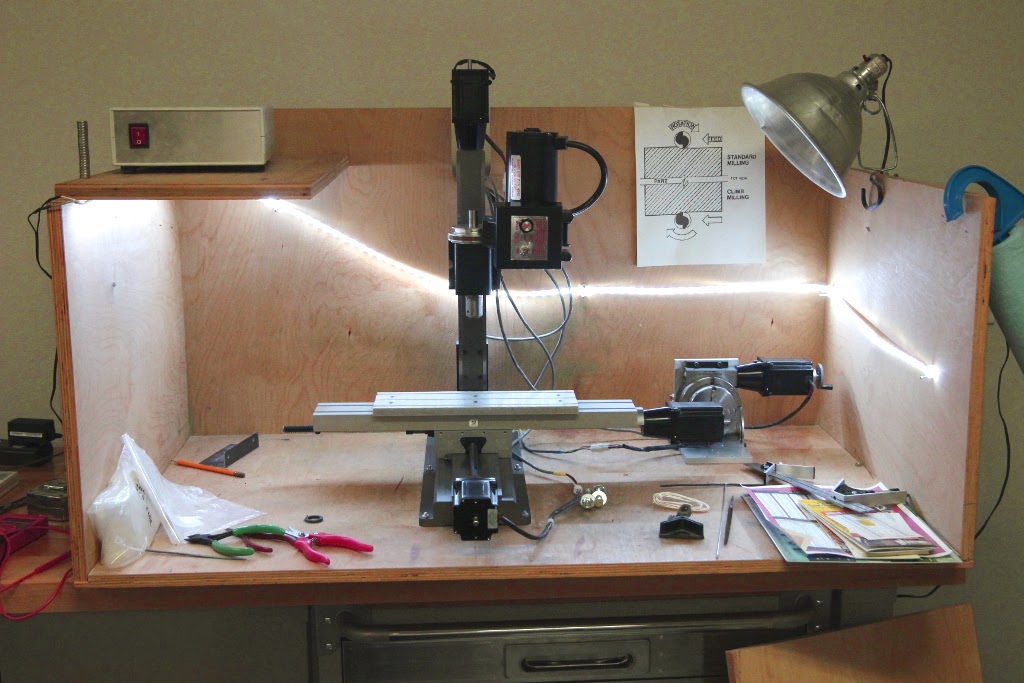 Several years ago, I decided to build a CNC lathe.  I bought the Sherline CNC-ready lathe, added motors, controllers, made cables; all that stuff.  I had gotten used to using the manual lathe by just walking up to it, chucking up a piece of work and doing what I needed to do.  I told Mrs. Graybeard I'd leave both lathes on the bench for a while and whichever got used more would be the one we keep.  I ended up hardly using the CNC lathe once I got it to thread.  The rifle part I did a little post on was done completely on the manual lathe.  (I've got to admit, though, power feed is a pretty nice thing to have.)

It's possible to run the CNC mill in an "immediate mode", like a BASIC language program.  Instead of loading a file of hundreds of moves for a part, a user can walk up to the machine controller (I use Mach3 now) and use a command line interface.  Just enter a command like "G01 X 2.000 3.000 F12" and hit return (translation: controlled speed "GoTo" for the X axis, 2.000 inches to 3.000 inches at 12 inches per minute).  I cut out my AR-15 lower fire control pocket with repetitive commands like that, over and over again.  But it's still not as immediate as walking up the mill, clamping or holding the part, indicating it, and turning a wheel.  Plus, while you might hear chatter and react to it in the CNC controller, with hand wheels to control the mill you can feel these things better.

My mill has always been CNC.  I've never used it in a fully manual mode like I have the lathe.  CNC is fantastic for never losing count of where it is, although it sure can get lost if the motor drops steps.  It never loses concentration and goes too far.  CNC has two main uses:  first, running many copies of the same part, rather than one part made one time, and second,  it's absolutely indispensable for really complex shapes.  CNC mills have become the standard way the jewelry industry carves waxes to cast in the lost wax casting process.   Can you imagine carving something like this wax freehand on the mill? 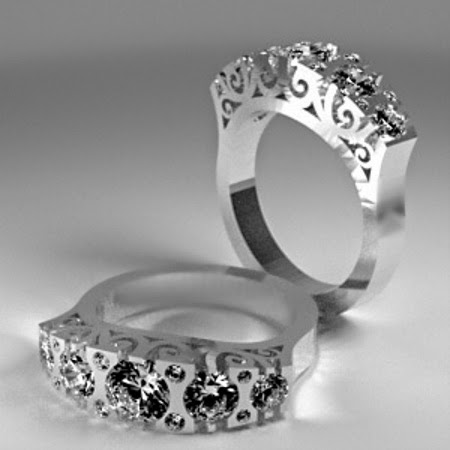 In summary of all this is, I'll probably get the mill as a manual mill and add CNC.  I'd strongly prefer CNC I could disengage.  I can't do this on my Sherline because the motors are directly connected to the shafts' axes.  I think a belt drive would be the answer to that.  If I find a setup like that, it will be a strong contender.