Are We Leading Students Down a Wrong Path?

Let me preface this by saying that the national "conversation" about the changing nature of work in this country has gone on for a long time and will continue to go on.  There are those who fervently believe that within a generation, robots will be doing most of today's low wage jobs and unemployment will approach becoming the majority of the population. Which means the other 50%, who are working, will pay benefits to those replaced by robots.  Can such a society be stable and exist more than a couple of years?  There are those who say that many of the good jobs have left the US and will never come back.

Still, as I've said before, I've been working in American manufacturing companies for almost 40 years - since 1976 to be exact - and the only constant has been people telling me that manufacturing is going away and will never come back.  I've been told over and over, as you'll hear pundit after pundit say, that America just doesn't make anything anymore.  America doesn't make the cheap consumer products that fill your local Wal-Targ-inc store; we make virtually everything else.   Chances are, you'll be getting most of those plastic things 3D printed within 10 years, anyway (my guess).  Today, I work for a company that exports products to China, and have for most of my career.

I don't watch much TV, but it's hard not to notice the drumbeat that we need to get more kids in engineering, or more precisely into STEM; Science Technology Engineering and Math.  Just last night, I was watching a bunch of fresh-faced child actors glamorizing the appeal of engineering for some company.  After scenes of various teen actors asking "who's going to invent?" various new things, the photogenic kid says, "Change the world?  It's in the job description".   Calculated to appeal to the idealism in kids.

But are those jobs really going to be there?  In Electrical Engineering Times, author Daniel Donahoe writes about what he sees as the decline of engineering in the Silicon Valley.


The US Department of Labor provides more detailed, if more bureaucratic, employment numbers than my simple reference to Craig’s List. The total pool of domestic electronics engineering jobs totaled 223,000 in 2012, some 57% of the total electrical engineering jobs if you include those related to electrical power.

The pool is projected to grow only 5% over the next decade, which works out to only 1,100 new electronics engineering jobs per year. The US graduates approximately 14,000 electrical engineers each year and imports many more. So digging up government data paints a darker picture.

Now graduating 14,000 engineers for 1100 jobs is obviously a problem, but it's worse than that.  We also import engineers under the H1B visa programs started in the 1990s.  Can you really argue we have a shortage of engineering graduates in this country?

His view of the problem is that industry has turned engineering into any other commodity, and all commodities are price-negotiated in business.  Now maybe this is too "inside baseball" for those who aren't engineers, but he talks about the way that companies have done so much to cut costs.  Not just offshoring things that aren't their "core competencies" (the parts of their business they think they're best at), but everything.  In Donahoe's view, the thing most fundamental to the Silicon Valley is silicon, but the current generation of American semiconductor companies proudly proclaim being "fabless" (they don't make their own silicon chips). 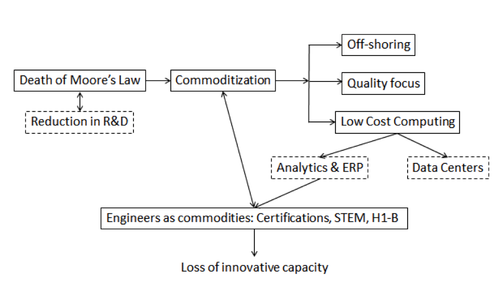 
Contrary to the Pidgin English promoted by freshly minted MBA’s from management consulting companies, the atrophy of American electronics engineering is not the magical result of an invisible hand or a disruptive force. It is due to a loss of character, or what I call the "great vacuum of American business thought leadership."

Let me caution that Silicon Valley engineers have developed a tendency to be a bit like New Yorkers, in the sense that they think they work in the "Capital of the Universe" and everything important in the industry happens there.  Lots of important engineering goes on in companies that don't make ICs at all; and never had a wafer fab to outsource.  Nevertheless, he has a point about commoditization.  It's why America doesn't make those plastic parts I referred to above.  They're too easy.  To distinguish yourself or your company, you need to do the hard things better than the other guys.  American companies don't make portable AM/FM radios anymore because anyone can make them.  American radio companies make industrial radios that are harder to make, and that are tested to work under extreme conditions.  And you can't consider the megatrends like outsourcing and fabless semiconductor companies without considering the regulatory environment and the government's footprints on the industry.  The famous founders of Silicon Valley, Bill Hewlett and David Packard, started in their garage (now a landmark in the Valley).  Today, they'd probably be locked up for environmental crimes, like dripping alcohol on the floor and leaving it to evaporate.  If it was easier and cheaper to start companies, more companies would be started, and likewise if it was easier and cheaper to run a semiconductor fab than outsource it, more companies would run fab operations.

As for the kids, it's hard to say if we're setting them up for future unemployment.  I don't know if anyone can demonstrate those commercials affect anyone.  While there might be a few percent of kids that could become engineers who have never thought of the profession, most of them have The Knack and know it - even if they don't have the words for it.  They know they're ... different. 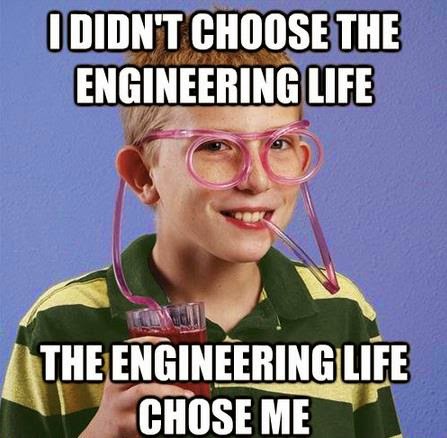